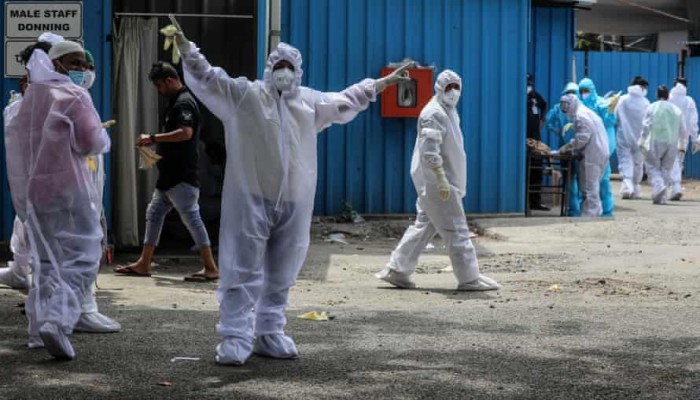 Devastating second wave of Wuhan virus has stuck India with such ferocity that life will never be the same again for lakhs of families who lost their near and dear ones. Deemed as “Crisis of the Century”, Wuhan virus pandemic has exposed the glaring lapses in the Indian health system and created a mayhem which hopefully might lay foundations for the total revamp of the entire system. To tide over this unprecedented crisis, Government of India has expended all resources at its helm. While experts have warned of an impending pandemic wave, they couldn’t assess the scale and proportion of the virus spread.

Talking about the intensity of the second wave, Ashutosh Sharma, Secretary Department of Science &Technology stated that their modelling studies couldn’t predict the scale, intensity and ferocity of the wave. Predictions by Dr VK Paul on April 2nd predicted an infection wave peaking in the third-fourth week of April with a case load of less than 1 lakh. But the confirmed infections were nearly three times1. At the time of writing India has reported 32.68 lakh active cases and 2.11 lakh fatalities.

Staggering Wuhan virus infections since mid-April have changed the dynamics of the pandemic management. Aside the complacency of government agencies, and citizens who arrogantly threw caution to wind enthused by flattening of the first wave of Wuhan virus, the second wave has been triggered by a more infectious double strain of SARS-CoV-2 that fuelled a rapid rise in infections. Like the countries across the World, India’s health system was overwhelmed.

Just as the first World countries scrambled for resources during the first wave and continue to do so, India was plagued by scarcity of resources. Treacherous virus, rendered even the best health systems across the World ineffective. Despite the pitfalls, the West was shielded from scrutiny which countries like India, a third World country is painstakingly subjected to. Ever since, India has been grappling the second wave of Wuhan virus, probing eyes of the Western media began to churn exclusive reports of India’s misfortunes.

Though Wuhan virus wreaked havoc in the West, bereft of the gumption to attribute the pandemic to China and calling it the Chinese virus, the Western media mischievously termed the double mutant as Indian variant. Indeed, this propaganda didn’t end there.

Patronising the pliant media and its overground agents, the West began peddling a narrative while India battled the ferocious second wave. The inexorable detestation of the West for the Hindus and more so the Modi regime is very established by now. Amid the burgeoning surge of Modi’s popularity and BJP’s resurgence in the poll-bound states, the West with their hand-maidens in India have kick started a new perception. It began to push the idea that the current wave was exacerbated by the Kumbh Mela congregation and the election rallies.

Interestingly by this logic, the farmers sit out protests at Delhi border for over the past five months and the sar tan se juda protests attended by lakhs of protestors are also equally potent beds of infection. But all the censure was reserved for the aforementioned events. This bigotry and hypocrisy was further amplified by the Western agencies- “Super-spreader’ erupts as devout Hindus throng Indian festival”2 and the Al Jazeera article- “Rallies, religious gatherings aggravate India’s worst COVID surge”3. The Wire went a step ahead and heaped the entire blame on Modi alone even as multiple parties actively participated in the election campaigning in its piece- “PM Modi a ‘Super Spreader’, responsible for COVID Second wave: IMA’s Navjot Dahiya”4.

Ironically these very agencies raised no alarm to the Tabligi congregation during the first wave and the violent nation-wide Black Lives Matter protests in America. While there is no denying of fact that large congregations will breed and proliferate infection, what is condescending is the blatant hypocrisy and the double speak by these Anglicised Brown Elite of India working in cahoots with the vested interests which is incorrigibly evident. The case in fact, is the announcement of cancellation of election day telecast by a leading Indian media agency.

Anticipating the fall out of a huge massive election rallies in pandemic times perhaps, before Bihar assembly elections last year, BJP proposed virtual campaigns (like in US Presidential Elections). But opposition argued that it is discriminatory and violative of equality5.

Given the unabated surge of infections, Modi government is cornered for its abject failure now. But interestingly, these agencies fail to pat India’s back for successfully managing the first wave. Instead of making a positive contribution towards curbing the pandemic resurgence, individuals and entities began to spread the vaccine hesitancy and posed biggest hurdle for the vaccination program which could have potentially contained the severity of infection from flaring up.

The misguided and the politically motivated campaign against the well-intentioned vaccination drive is now costing the country enormously in terms of resources and the crucial medical help to be diverted to viral infections which could have normally recovered with regular medical supervision.

Not withstanding the advancement of the politically motivating agenda which is opening and widening the existing fissures in the country, the vested interests resorted to be most inhuman and despicable propaganda over the deaths in India due to Wuhan virus.

With one of the lowest Cumulative Fatality Rate (CFR) of 1.1% while India is doing comparably well, undue alarm has been raised over the misreporting or rather underreporting by some states (read as BJP-ruled states). But all these pointed fingers failed to call the bluff of Andrew Cuomo, Mayor of New York who has reportedly fudged Wuhan virus fatalities in state’s nursing home which runs into several thousands6.

As the death numbers continue to mount, the travesty and the plight of the bereaved families has become a big propaganda tool for the vested interests. Unmindful of sensitivities of the families who lost dear ones, media agencies began to predate on them for misery stories. Also, by comparing the absolute numbers without normalising to deaths per million, the West (significantly the American media) prominently with a population less than one-fourth of Indian population is stoking a panic wave.

Violating the basic decency, journalists resorted to the most awful act of capturing the image of the funeral pyres in the cremation grounds. Denying the individuals and the families of the minimalistic privacy, feeding on the Western dollars, journalists started splashing the most heart wrenching images of families and mass cremation of drone captures as headlines. Brazenly, these journalists defended these acts under the umbrage of befitting reportage of the humanitarian crisis.

Morbid obsession of the media agencies to mock at India and Hindus amid this collective misery and suffering invariably reflected the deplorable colonial mindset and their despicable entitlement.  The West which is very touchy about coverage of the death and personal tragedies, miserably failed in extending similar courtesies to India.

Even as netizens questioned the vulture journalism and the vicarious pleasure in grisly visuals of the pandemic funerals, hankering for an air time on international news channels, Indian journalists started marketing even personal loss to tarnish India’s image.

There is no denial of the fact that the second wave has left India scrambling for resources. The health systems of the most developed countries failed to cope out with scale of infections. People in Israel, Germany, France, Poland, the Netherlands Nepal and several Latin American countries took to streets to protest government’s mishandling of the pandemic. While this is no excuse to absolve the glaring inefficiencies of the central and state governments, the media which is supposed to play a responsible role has exacerbated the crisis with panic mongering.

This woefully irresponsible journalism has prompted medical professionals in India to write to the government to issue some curbs and rein in on their callous reporting7. Media the fourth pillar of state is expected to report facts to dispel myths.

Incapable of seeing anything beyond gloom and despair, the positive stories and the collective efforts put together by corporates, individuals, startups, voluntary organisations which could infuse positivity were strikingly avoided by the media and the influential elite brigade of India.

Keen on lapping any opportunity, to pull rug under India’s current dispensation which they love to hate, tending to the vested interests (read the Break India forces), media and the cabal is using the pandemic to foster an inimical agenda. Devoid of logic and sensibility, the unbridled negativity and anti-Indian propaganda touching nauseating levels. It is time to call the bluff of these media agencies which are acting at the behest of vested interests.

Clearly all hasn’t been lost, tragedies and catastrophes strengthen the resolve of individuals and countries to mount a battle with rejuvenated commitment. The most important lesson this entire episode has taught is how narratives are being set and their impact on the World’s perception about a nation. Having succeeded in setting narrative in America recently, the cabal is trying to replicate the same in India a bastion which the cabal is trying to penetrate since 2014.

The vilification is so acute that Foreign Minister Jaishankar has asked diplomats to take on the one-sided World media narrative on government’s pandemic failure8. Here in comes the prophetic words message of Vikram Sood in his book “The Ultimate Goal” handy where he enumerates- “Narratives are not the truth; rather, they nudge you to understand the truth in a particular way. They are never neutral or innocent; they are always strategic. Narratives are about perceptions-of events and goals”. Read together with George Orwell’s stance, “political language is designed to make lies sound truthful and murder respectable, and to give an appearance of solidity to pure wind” it makes clear sense of what is being fed to us under the garb of news and expert analysis.

Don’t get swayed away by this politically motivated agenda, lest you end up harming your own interests and interests of the nation.