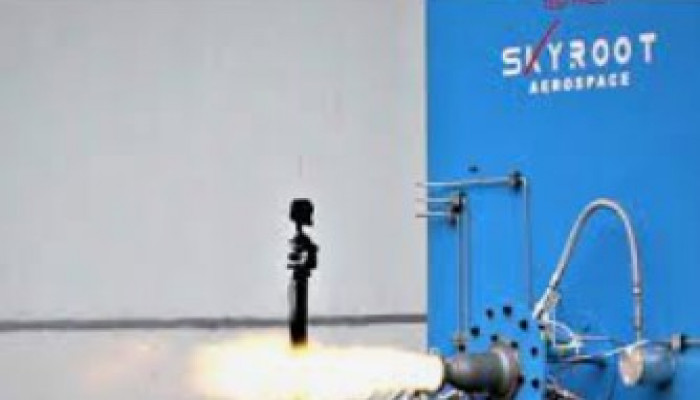 The desi startup was founded in 2018 by former ISRO scientists Pawan Kumar Chandana and Naga Bharata Dhaka has developed a series of three Vikram rockets capable of carrying payloads of upto 720kg to low earth orbits.

“This is a completely ‘Made-in-India' cryogenic engine developed using 3D printing with a superalloy, reducing manufacturing time by more than 95%,” said Pawan Kumar Chandana, cofounder and chief executive at Skyroot Aerospace. “This test makes us one of the very few companies in the world to have successfully demonstrated this technology.”

Having achieved this milestone, Skyroot has demonstrated each of the three propulsion technologies that will be used in its first series of small satellite launch vehicles. In December of last year, the company successfully tested its Kalam-5 solid-propulsion rocket engine, which will power the lower stages of its Vikram rocket.

“The complex engine start and shut-off transients (were) perfectly smooth, combustion was very stable, and pressure was rock steady. This is a phenomenal achievement by our team and we’ve mastered handling two cryogenic fuels,” said Padma Shri awardee V Gnanagandhi, who heads the cryogenic propulsion team at Skyroot.

Currently six countries- US, China, Russia, France, Japan, and India, possess cryogenic engines. In 2001, India successfully launched its first GSLV. Arianespace and Blue Origin, two private space companies, have also developed cryogenic engines. Furthermore, the company will be using a green and sustainable fuel for the rocket, along with the engine.

With a quick turnaround time and at a very low cost, the company is looking to develop and manufacture rockets that will shoot small satellites into space. In addition to 3D printing to make the rocket engines, Skyroot will use carbon composites to design the rocket cases, which are lighter and stronger than steel.

Additionally, Skyroot plans to launch rockets using portable launchers, offering a lot of flexibility to companies that partner with the company.

In September this year, the company became the first space technology company to formally enter into a partnership with the Indian Space Research Organisation (ISRO) to access its facilities and expertise to help test and qualify its small satellite launch vehicles, the first of which is scheduled for launch in 2022.