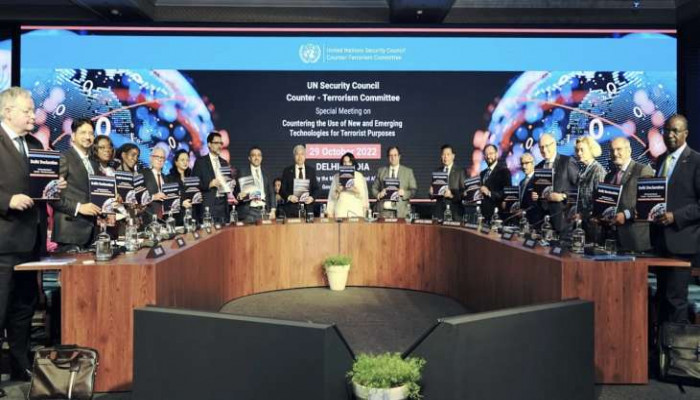 India recently hosted the UNSC Counter-Terrorism Committee meeting. The two-day meeting which concluded in New Delhi on October 29th is the first meeting of the UNSC, in any format held in India. Being the worst victim of cross-border terrorism, India has always been at the forefront of leading the counter-terrorism movement.

UNSC resolution 1373 unanimously approved the establishment of the UN Counter-Terrorism Committee (UNCTC) on 28th September 2001 in the wake of 9/11. India chaired the committee for the first time in 2011 and over a decade later, became the Chair of CTC in January 2022. Debunked as a non-issue, terrorism as a threat to national and global security hit the West only after 9/11 attacks. India chose Mumbai as the venue for the inauguration of the meeting to draw the World’s attention to the dastardly attacks that killed 166 people which included 26 foreigners belonging to 23 countries.

The global fight against terrorism assumed its present proportions after Al-Qaeda’s attack on the New York twin towers. But the fight lost its significance after the US tactically inked an agreement with the terrorist group Taliban and lent it political legitimacy. Indeed, the two-decade-long protracted war ended in a dubious surrender and return of a terrorist regime to the region which has been precariously bearing the brunt of the terrorism.

The UNCTC meeting has come at a time when China for the fifth time in four months stalled the proscription of five Pakistani terrorists who engineered terror attacks against India. The well-intentioned sanctions regime against terrorists is being successively rendered ineffective by UNSC member states for political reasons. The glaring lack of consensus has plagued the global fight against terrorism, a scourge on mankind.

In addition, nations thus far have failed to arrive at the definition of terrorism. By labeling them as ‘good vs bad terrorist’ or ‘my vs your terrorist’ 1and by providing a smokescreen to them under the charade of human rights, nations have seriously impeded the international fight against terrorism.

The human rights angle has viciously diluted global combat against terrorism. By drawing parallels to the racial/ethnically motivated extremism as a form of terrorism (REMVE), the European countries and the US, where this kind of violent acts are a core domestic issue, have undermined the serious fight against terrorism1. Unlike terrorism, the violence pertaining to racial extremism is restricted to certain pockets and not global. Even the 2022 Global Terrorism Index points out that politically motivated attacks are on the rise while terrorism declined2.

In their penchant to take on the rising right-wing nationalism and to be politically right, motivated attacks are now simply white-washed as “provocation acts”. Prioritizing domestic issues, barring a few attempts to neutralize high-profile terrorist leaders, the US is narrowing its focus on terrorism even as UN reports warn of burgeoning terror attacks in Asia and Africa.

Subsequently, driven by domestic motivations, Member States began to include “violent nationalism”, “right-wing extremism”, “racially and ethnically motivated violent extremism”, and “xenophobia” under the ambit of the global counter-terrorism strategy (GCTS)3. Obviating the cardinal belief of terrorism has no religion, the 28th para of the 7th review of GCTS passed by UNGA stated, “recognises with deep concern the overall rise in instances of discrimination, intolerance and violence, regardless of the actors, directed against members of religious and other communities in various parts of the world, including cases motivated by Islamophobia, antisemitism, Christianophobia and prejudice against persons of any other religion or belief”4.

With the inclusion of “Abrahamophobia” in the CGTS, the UN has effectively diluted the global fight against terrorism and justified terror. This implicit bigotry in terms of characterizing the motivation for terror has stifled the collective combat against terrorism.

India which was elected to the UNSC for the two-year term for the eighth time in 2021 focussed on three issues- terrorism, maritime security in the Indo-Pacific, and Protection of the UN Peace Keeping Forces. During the month-long presidency in August 2021, India held two open debates including one on terrorism titled, “Threats to International Peace and security caused by terrorist acts” where India proposed an 8-point plan action plan or cardinal rules for countering terrorism in the wake of the return of the Afghan Taliban to power.

Subsequently, to enhance the role of CTC and strengthen the multilateral responses to combat terror, India voted in favour of the renewal of the mandate of the Counter-Terrorism Committee Executive Directorate (CTED) till the end of 2025 in December 2021. CTED assists CTC by conducting visits on CTC’s behalf to assess Member States’ shortfalls and counterterrorism efforts and cater to technical assistance needs.

India has always consistently supported global counter-terrorism efforts. Taking over as the Chair of Counter-terrorism this year, India’s permanent representative to the UN, Tirumurti flagged the new challenges posed by the misuse of emerging technologies for terrorism and urged nations to strengthen the global counterterrorism strategy (GCTS). 2022 Global Terrorism Index also noted, “As technology has advanced so has its use by terrorist groups. This includes missiles and drones, which extend the reach of their attacks and reduce their casualties. Affordable smartphones, social media and encryption are other technologies that also extend their networks, making the spread of propaganda and recruitment easier”.

Certainly, the lack of political consensus prevailed as a major drag, with Member States unable to assess what constitutes radicalization. Determined to fight the menace, India painstakingly held months of negotiations and put in place the Delhi declaration. The declaration is essentially a summary of India’s proposal and framework to address terrorism. Unequivocally, reiterating “zero tolerance” towards “all forms and manifestations of terrorism”, India managed to extract a non-binding commitment from Member States to end terrorism.

At the Mumbai leg of the UNSC-CTC meeting, not naming Pakistan, India played a clip of Sajid Mir who engineered the 26/11 blasts vindicating its position. Earlier, China used a technical hold to stall his designation under the UNSC 1267 committee. With the Afghan Taliban in power and Pakistan exiting the FATF grey list, India’s highlighted the precarious state of affairs in the subcontinent.

Turning commitment into action, India brought out some guidelines to extricate terrorism which is rapidly extending its reach and capabilities through the use of new technologies. Voicing concerns at the special session, EAM Jaishankar said, “Internet and social media have turned into potent instruments in the toolkit of terrorist and militant groups for spreading propaganda, radicalisation and conspiracy theories aimed at destablising societies”5.

Notwithstanding the setbacks and lack of support, India rolled out a framework and essential guidelines to protect civilised societies from the menace of terrorism. The meticulously worked out “Delhi Declaration on countering the use of new and emerging technologies for terrorist purposes” reaffirms, “terrorism in all forms and manifestations constitutes one of the most serious threats to international peace and security” and adds, “that any acts of terrorism are criminal and unjustifiable, regardless of their motivation, whenever, wherever, and by whomsoever committed”.

The Declaration exhorted Member States that ignored the perils of terrorism pandering to domestic constituencies, “to ensure zero tolerance towards terrorism, consistent with their obligations under international laws, including human rights law, international humanitarian law and international refugees law”. It noted with concern the use of the internet, social media platforms, other communication and communication technologies, financial technologies, and crowdfunding platforms, to recruit, indoctrinate and radicalise people.

Cognizant of the close links between drug and arms trafficking the declaration acknowledged the misuse of Unmanned Aerial Systems (UAS), drones, and quadcopters that increased the accessibility of both drugs and weapons at a very low cost. Fostering innovation, the declaration urges States to prevent their use by non-state actors for terror acts and develop counter-terrorist narratives and innovative technologies while respecting international law.

Recognising the work of FATF’s work on virtual assets and virtual assets service providers (VASP), in monitoring payment services, and discharge of anti-money laundering measures, the declaration called upon the watchdog to improve the global implementation of counter-terrorist financial measures. Concomitantly, the declaration even called on States to enhance the traceability and transparency of financial transactions and encouraged financial intelligence services to develop effective partnerships with financial service providers, social media agencies, to trace the sources and methods of financing terrorism6.

Underscoring the importance of curbing terror financing and the role played by watchdog FATF, Indian intelligence agencies briefed that in 2018, when Pakistan was grey listed, there was a 75% decline in terrorist bases on Pakistani territory. India experienced “a window of relative peace”. With the removal of Pakistan from the grey list after four years, terror bases already increased by 50%7 and India is expecting “scalable attacks on hard targets”.

The declaration urged the Member States to fulfill the obligations enshrined under international counterterrorism conventions and took a dig at countries that have made “terrorism a state-sponsored enterprise”. It appealed to states to identify safe havens and deny terrorist access to them and bring to “justice anyone who supports, facilitates, participates or attempts to participate in financing, planning, preparation or commission of terror acts including in providing safe havens in accordance with domestic and international laws”.

To aid capacity building, India contributed half a million USD to UN Trust Fund for Counter-Terrorism. The UN has unanimously adopted the landmark Delhi Declaration in countering terrorism. Open societies in particular are bearing the brunt of terrorism with non-state actors using the ethos of open societies to attack their freedom, tolerance and progress. A clickbait liquidation of top terrorist leaders can never decimate terrorism which thrives on a noxious ideology.

Terrorist attacks on Iran’s Shiraz shrine, Somalia car bombing during the summit and a failed suicidal bombing in Coimbatore, India, a fortnight ago suggest that concerted international coordination is a must to dismantle safe havens of terror, training grounds, and financial, ideological as well as political support structures.

Countering terrorism is a major foreign policy decision of India. Slated for a month-long UNSC presidency in December, India is all set to rally for collective international support to combat terror.