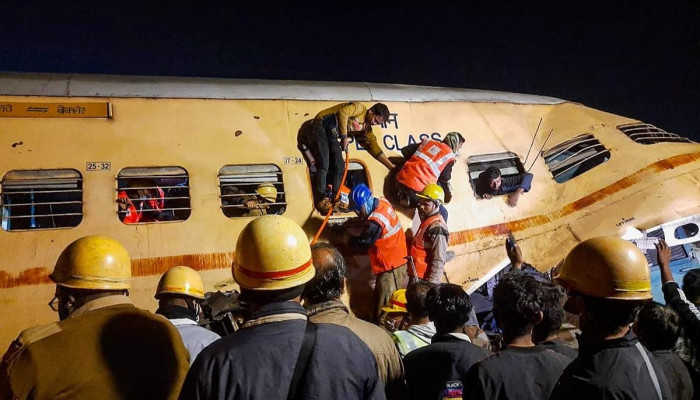 Railways Minister Ashwini Vaishnaw has arrived in Kolkata on Thursday after the Bikaner-Guwahati Express (15633) train got derailed near West Bengal’s Domohani area near Jalpaiguri. The train was headed from Patna to Guwahati.

The preliminary inquiry into the Bikaner-Guwahati Express train derailment revealed that a glitch in locomotive equipment led to the accident.

"Preliminary inquiry shows there was a glitch in locomotive equipment. The Commission of Rail Safety is conducting an inquiry to find the root cause behind the accident," Railway Minister Ashwini Vaishnaw said as quoted by ANI.

The Commission of Railway Safety also ordered a high-level investigation to probe the Bikaner-Guwahati Express derailment.

According to the Railway Ministry, nine people have succumbed to their injuries while 45 passengers have been injured in this incident.

He further added that we will ensure such incidents do not take place in the future. Railways Ministry officials have also reached the site of the incident.

“It is an unfortunate accident. Investigations are going on. We are trying to perform the responsibilities of Railways towards the passengers. Rescue operation has been completed immediately. Injured have been taken to hospital. Rest [of them] have been taken to their destination. I am going to the spot. We will find the root cause and make sure that kind of things does not happen in future. Total division team and zonal railways team are working on it. BSF, NDRF and other bodies are working jointly,” said Vaishnaw.

“Spoke to Railways Minister Shri Ashwini Vaishnaw and took stock of the situation in the wake of the train accident in West Bengal. My thoughts are with the bereaved families. May the injured recover quickly,” the Prime Minister said.

“Anguished to learn about the loss of lives due to a tragic rail accident in West Bengal. My deepest condolences with the bereaved families. Praying for the speedy recovery of those injured,” the Home Minister tweeted.

Railways has also announced an ex-gratia payment of Rs 5 lakh for those who died due to this incident, Rs 1 lakh to grievously injured and Rs 25,000 for passengers with simple injury. Twenty-nine injured patients, who have been admitted to different hospitals, have been paid ex-gratia payments. District administration has also provided food packets to the passengers.

Meanwhile, all those who want to contact their relatives and want to know about their well-being can gather information about them through helpline numbers announced by the Indian Railways.