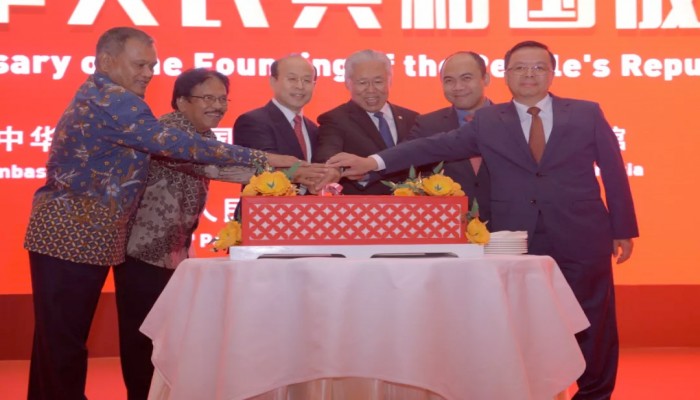 At a time when the international discourse is dominated by the whirl pool of attacks and counter attacks in the Middle East, China is stealthily asserting its claims over Indonesian EEZ (Exclusive Economic Zone). Echoing India’s invasion at the height of the Cuban crisis, China has launched its South China Sea annexation scheme. Towards the end of December four Chinese Maritime Law enforcement ships entered the Indonesian EEZ with 63 fishing vessels into the Natuna island chain. Despite repeated warnings, Chinese vessels lingered in the region.

Natuna islands are located in the Riau Island province is the northern most region of Indonesia. The 200 nautical miles from this region which is still the EEZ of Indonesia overlaps with the China’s Nine Dash line. China violated Indonesian territorial sovereignty by entering the region claiming it to be traditional fishing ground of Chinese fisherman. This region being far end of the SCS has been the region of contestation for quite some time. Chinese fishing incursions have been a regular event. Afflicted by illegal fishing and incursions, in October 2015 President Jokowi issued an order to form a combat territorial force SATGAS 115. But the Chinese fishing vessels continued to enter to this region.

In June 2016, as a direct message to China, President Jokowi visited the Natuna Island in a Naval warship, held a limited cabinet meeting and approved funds to develop a military base in Natuna. Clearly, China’s repeated incursions predominant buttressed anti-Chinese sentiments in the island. Interestingly, China’s transgression in 2016 came just days after its vehement refusal to abide by the Permanent Court of Arbitration’s verdict. In October, asserting control Indonesian Navy held a grand military exercise near Natuna. Unabated Chinese aggression forced Jokowi to herald a new policy. Constituting a taskforce, by mid July 2017, Indonesia renamed the EEZ of Natuna islands as “North Natuna Sea” and issued new names to 1,106 islands in the region. With this Jokowi who was perceived as pro-Chinese by some sections not only successfully burnished his nationalist credentials but delivered a strong strategic message to China. Indonesia submitted this new change to the UN and reasoned that policy will prevent confusion among sea farers about the continental shelf and provide new guidelines to the Law Enforcement Team of Indonesian Navy.

On December 30th, Indonesian Foreign Minister asserted that, “Indonesia did not have an overlapping claim with China”. He added, Indonesia “will never recognise nine-dash line which contravenes both UNCLOS (UN Convention on the Law of the Sea and the UNCLOS 2016 tribunal ruling”. But the Chinese foreign ministry spokesperson insisted that ships were performing routine activities to protect Chinese legitimate rights and interests in the relevant region. Undeterred Indonesia’s strong stance, to initiate negotiations, Beijing maintained, “China would like to work with Indonesia to continue managing disputes properly through bilateral dialogue and maintain friendly cooperation, as well as peace and stability in SCS”.

Cognizant of China’s stealthy annexation attempts of Spartly’s islands, Indonesia flatly refused the possibility of any dialogue. Indonesia objected to Chinese claims as “unilateral”, had no legal basis and never recognised by UNCLOS. It rejected Chinese assertion that its fishermen have been active in this region. Though Indonesian Navy have driven away Chinese vessels from Natuna’s EEZ they continued to lurk in the region.

On Jan 8th, in what can be termed as the repeat of 2016, Jokowi visited Natuna Islands to take stock of the situation. Launching, “Operation Combat Alert Natuna Sea 2020” Indonesian Navy beefed up forces, stationed eight warships. Airforce deployed four F-16s to patrol the region. Government encouraged the presence of fishing trawlers ordered the authorities to make necessary arrangements to populate the islands with immediate effect.

After Indonesia lost Sipadan and Libitan islands to Malaysia in International Court of Justice ruling in 2002, it began to adopt an uncompromising stand towards its sovereignty. Being the largest archipelago with over 17,500 islands and rooted in a sea faring tradition it understands the importance of securing maritime interests. Indonesia which straddles two oceans- Indian Ocean and Pacific Ocean, is a significant player in Asian and Australasian regions. Its waters are plagued by illegal, unregulated fishing, unresolved border disputes, piracy and terrorism. To tackle and streamline the maritime challenges and liabilities and turn them into beneficial opportunities, Jokowi envisioned Global Maritime Fulcrum (GMF) strategy. As a part of GMF, Indonesia created new maritime security Agency, BAKAMLA.

Under GMF, Indonesia made extensive plans to develop 24 deep sea ports to connect Sumatra, Jakarta, Java, Borneo, Sulawesi and South Papua. With an eye on infrastructure development, Indonesia fostered ties with China. Economic ties prospered. China is now Indonesia’s largest trading and investment partner. Indonesia which is dire need of improving connectivity partnered with China under the BRI to boost infrastructure development. It recently allocated projects worth $91.1 billion under BRI to China. Plans of shifting capital city from Jakarta to Borneo on cards, Indonesia increasingly relied on China for construction and development of new capital.

China knows that Indonesia needs the Dragon for crucial infrastructure development. In a veiled threat to Indonesia, China invoked BRI and its bilateral relations defending its incursions. Given China’s reputation of penetrative expansionism, Indonesia refused to budge from its stated position. Maritime Affairs and Investment Minister while acknowledging the importance of trade and investment relations, unequivocally asserted that country’s sovereignty is not for sale to Beijing.

China’s adventurism in the SCS knows no bounds. According to some reports on January 3rd Chinese Coast Guard Cutter threatened Malaysian offshore ship Executive Benevolence 125 nautical miles north west of Luconia breakers. On January 9th 38 stationary Chinese boats were found close to Pag-asa Islands, located in Spartly Island group claimed by Philippines. Ever since Philippines constructed a beaching ramp and turned it into sheltered port, China began contesting it. Soon it turned into region of high confrontation between both countries. Throughout 2019, Philippines and China wrangled over the Pag-asa island. Employing asymmetric warfare and using its swarming and ramming tactic, China denied smaller neighbours their control over claimed regions through coercion. Spurned by constant threats from China, Philippines has set a goal of recruiting 25,000 personnel by 2025 to safe guard its waters.

In December, Malaysia challenged Chinese claims in SCS and asked the UN to issue a clarity on the limits of its continental shelf beyond the limits of 200 nautical miles in the north SCS. China is embroiled with Vietnam over territorial incursions and oil exploration in the continental shelf nearly every year. Months long stand-off between China and Vietnam near Vanguard coast ended in October. For the first time after 2009, Vietnam released a white paper outlining the unilateral, coercive actions of China.

China nearly claims 90% of the SCS which is contested by five countries-Philippines, Taiwan, Vietnam, Malaysia and Brunei. At the heart of the maritime disputes in the region has been Chinese greed to control the access of SCS through which trade worth $5 trillion passes, its desire to explore and exploit the natural resources in the region especially oil and natural gas and turn it into an impregnable Chinese military fortress.

It is time that Indonesia began reinforcing alignments with South East Asian Countries. Indonesia is the largest economy in the South East Asia and has largest armed forces. It is the leader of ASEAN countries. Together with the claimant nations, it should force ASEAN to review trade and investment cooperation with China. Alternately, Indonesia should contemplate using bilateral cooperation under BRI and multilateral cooperation under RCEP (Regional Comprehensive Economic Partnership) as a leverage. [Malaysia and Myanmar sought a review of BRI projects by threatening to cancel projects]. Amidst this stand-off Jokowi has asked Japan to step up its investments in Indonesia. Also, at the height tensions with China, America’s International Development Finance Corporation (IDFC) a competitor of BRI arrived in Jakarta to express its interest to participate in Indonesia’s development projects. In a bid to undercut the indispensability of China, Indonesia is planning to secure financial assistance worth $5 billion from America’s financial wing for developing countries and private sector. Clearly, Chinese hegemonic overbearing and a persistent threat to sovereignty might eventually force nations to look for alternate sources.

Despite being a non-claimant of the SCS territorial disputes, Indonesia is now facing the constant incursion threats from China. ASEAN which used to be a cohesive unit began to fall apart under the China’s influence. Indonesia must strive to bring these nations together and prevail on China to wrap up the “Code of Conduct”. ASEAN has set 2021 as the deadline under Vietnam’s chairmanship. ASEAN countries by staking an active claim forced the QUAD to recognise the pre-eminence of ASEAN in the Indo-Pacific region. Voicing their concerns as a single unit, ASEAN can force China to respect the sovereignty rights of all the nations in the regions and refrain from infringing the sovereignty of these countries. ASEAN countries have been at the receiving end of China’s hegemony and unabated expansionism. As the largest country, Indonesia must try bring the nations together to raise the military and non-military costs for China to curtail its unrestrained hegemony.