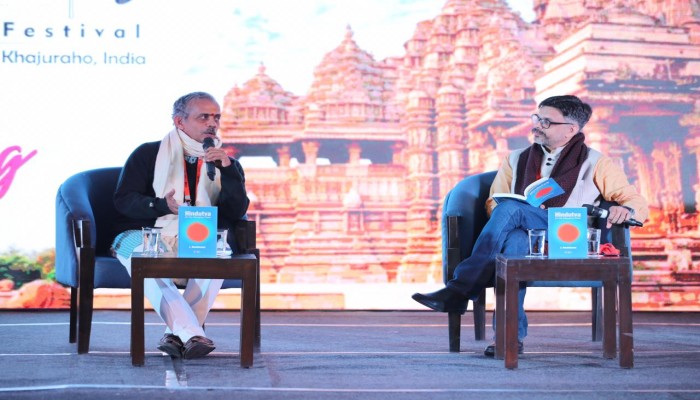 KLF aims to cultivate the Indic ideas and values in our public discourse and discussions.

It was not much ago when the Literature festivals were the events, mostly and regularly happening in the big cities across India, to discuss and debate about the range of issue in pubic discourse. This trend was also evident globally where noted names from the academic and public life used to meet over and deliberate on issues concerning public policy and governance. However, in recent years India has witnessed a new trend of celebrating Literature festivals in small towns and new places away from the big urban centers and metropolitans giving space and platform to the new voices and faces across the country. It is also backed by the more prudent and active ideological expression from the Indic School of thought on issues within public discourse, also aimed to make a course correction and reinterpretation of Indian history and related developments.

The second edition of Khajuraho Literature Festival 2020 happened recently at Khajuraho, Madhya Pradesh (MP), a silent town situated in the central Indian peninsula, a hallmark of Indian art and architecture which is also an expression of same intent and celebration of Indic ideas. The town of Khajuraho, which is the symbol of ancient India’s age old civilizational and cultural heritage witnessed for over three days from 18-20 January, 2020 a large presence and expression of different perspectives on key socio-political and economic issues from diverse set of speakers gathered for the much awaited second edition of the Khajuraho Literature Festival (KLF2020).

The three-day KLF 2020 began with an inaugural celebration of cultural festival and traditional exhibition on different arts and cultural heritage traditions of India. Sh. J. Nandkumar, all India convenor of Prajan Pravah, affiliated with RSS delivered the inaugural address in the gracious presence of Radheshyam Singh, Education Minister, Manipur government. The session was chaired by noted film director Vivek Ranjan Agnihotri. He highlighted the importance of celebrating the ideas and knowledge from Indic perspectives, which remains a great legacy of our common composite cultural heritage. Vivek Agnihotri made opening remarks on how the new age content based Indian cinema has become new medium for expression of Indic vales and thoughts.

The very first session which was on ‘Media Ka Dharm”, drew some of the intelligent brains from Indian media and journalism at Mint Bundela Resort, the venue for the KLF 2020. Senior media personalities and editors discussed about the role of media and the ‘dharma’ of the media professionals in the contemporary India. Highlighting the role of social media, Samir Abbas Executive Editor, TV9 Bharatvarsha; said, “It has been influencing the mainline journalism to a great extent”, in present times. The session invited views from poet and lyricist; Pranay Upadhyay, Associate Editor, ABP News; Prakhar Shrivastav, Output Head, News24, Swati Goel Sharma, Swarajya Mag and Ms Priyanka Deo from New India Junction.

TV journalist Ms Pramila Dixit, who made some necessary interventions on the subject, moderated the session. While Swati Sharma emphasized on the need of regulation of the media industry, Prakhar said ‘being truthful and unbiased’ is the mantra for good journalism. The session noted that an ideal journalist should remain honest to the profession.

Senior journalist Aarti Tikoo, along with Rahul Roushan, Abhinav Khare, Asianet News, Lt Gen Shokin Chauhan and Sandeep Singh, addressed another important session on ‘State, Identity and Citizenship: Recalibrating the foundations of Strong Nation and India’. It emphasised the limits of theorizing identity within a nation in European model and noted the presence of multiple identities in a modern nation state like India. The festival witnessed discussions and sessions on many topics of contemporary interests like as Resurgence of Hindutvian Discourse, Politics in New India, Ideology and the Politics of Jugaad, Unity with Diversity from speakers in areas like journalism, artists, politics, policy makers, academics and scientists.

As the festival progressed a ‘bonfire interaction’ which was meant for young authors and writers was another attraction of the KLF 2020. Novelist Saiswaroopa Kumar, Author Shantanu Gupta and young Poet Ramkrishn and Maj Saras Tripathi put forward their views. During the interactions, it was argued that Books are the best source for any academic reference must remain so in future, even in the age of media pluralism and age of online information. It was noted by Shantanu Gupta, author of popular book The Monk and the Chief Minister (2017) that, “Everyone should write a book during their lifetime”, which could be a great academic asset for generations to come and learn from the past.

The KLF2020 is being organised under the aegis of LokNeeti India. The theme of the event is ‘Forging unity by assimilating diversity’. The three-day event finely captured the imagination and celebration of indigenous ideas from the remote places to the India mainstream. KLF aims to regionalise these kinds of literature festivals with the presence from both local and mainstream speakers and is a good effort towards discourse dissemination from the masses to the mainstream in an anti-essentialist Subaltern framework.

Satyendra Tripathi, the Conceptualist and Curator of Khajuraho Lit Fest, said that, "It is a platform for the exchange of ideas, and an endeavour to bring together the best of the minds of the country to reinvigorate the spirit of India’s cultural unity. We are aiming to include our value system more in the discussions of our Literature festivals, and KLF 2020 is the one step in the same direction”.