Can âThe Hinduâsâ cynical interpretation of the data ever be remedied? 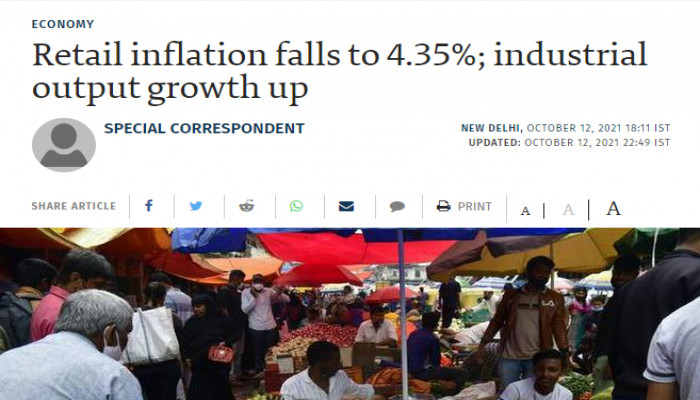 I woke up to the pleasant news of inflation coming down to 4.35%. To the great news that industrial output is up. It filled me with happiness that the people of our country are doing everything they can to revive the economy that has been hit with COVID pandemic twice in two years. They are leaving no stone unturned to ensure pre-covid levels of activity becomes the norm. And then I read what the intellectuals at The Hindu tell us in their front page – “Don’t read too much into the encouraging data: economists”.

Why must we not be encouraged by this data? Because according to the economists - “barring food and housing, most sectors recorded a flat or higher inflation reading in September.” So, food and housing showed lower inflation, yet we should not be encouraged by this news? What do the high lords mean by “most sectors”? If “most sectors” remained flat inflation, then isn’t that also news by which we must be encouraged? I continued to read the article to see if there is any logical justification for not being encouraged by this happy news. The economists and the high lords at The Hindu have fallen back to their age-old argument against any good news related to economy, i.e. “The growth in IIP in August is mainly because of the base effect”

So, next time any reader comes back with the “base effect” argument to justify a lower growth or higher inflation number, will the intellectuals at The Hindu front page accept that argument too? I was beginning to wonder if the editors at The Hindu would not read too much into data when the inflation sees an increase? Or will they stop reading too much into the data when GDP growth comes down by 0.1%? Or better yet, will they stop reading anything into any data and relieve us of these gems?

My mind went back to the that time in October 2015, when Srinivasan Ramani , then deputy editor of The Hindu, went ballistic on Prime Minister Modi and also ended up calling all those whom the Prime Minister follows as “buffoons”. The RBI had just released a projection table in Q1 of that year which said the growth will be 7.7% in Q4 of that financial year. When the Prime Minister mentioned that the RBI was predicting 7.7% growth for the “coming quarters”, Srinivasan Ramani lost his marbles and went on a rant to say the Prime Minister was following “buffoons”. Users showed him the table that RBI released, but he still didn’t relent. He got confused with Q1, Q2,Q4 etc, got confused with grammar, and got confused with the concept of financial year! Srinivasan Ramani also told us that we should not be concerned with quarterly growth numbers and should focus only on the full financial year. When his silliness was being proved by multiple users on twitter, he changed tack multiple times before emphatically declaring that “You can’t cherry pick”. Basically, we must all bow down to whatever the editors at The Hindu tell us.

My mind also went back to that time in October 2017, when The Hindu published a half page article in their business section titled “Mr. PM: it’s time for bold economic thinking”. The only twist in that article being that the PM had already implemented everything that the high lords have asked him to do! Infact, the authors were recommending lesser penalties for those hoarding money than what the PM had already implemented!

So, this attitude of the editors and intellectuals and economists at The Hindu is not new. We mustn’t celebrate anything as long as the NDA is in power, even if there are worthy causes for celebration. They have always told us, ordinary citizens of the country, what to read; how to read; and when to read. And if you deviate from the path, they tell you to follow, then you end up being a “buffoon” and a “troll”.