The Brouhaha over Kashi Vishwanath Corridor is Misplaced 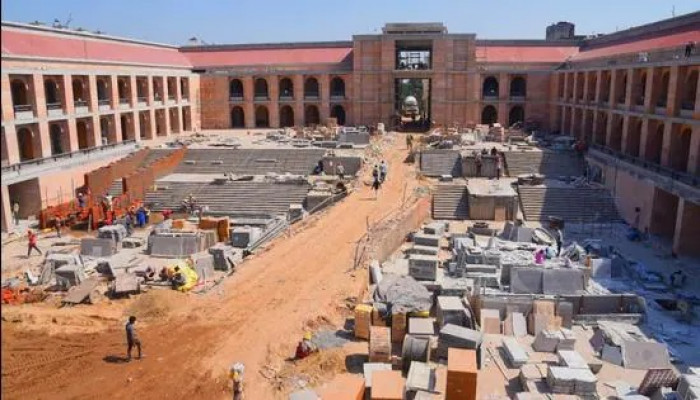 One of the most ancient living cities on earth and the epicenter of Hindu religion and Indian civilization, Kashi is undergoing a grand makeover, after 1780 AD, when Maratha queen Ahilyabai Holkar of Indore last time renovated the temple and the area surrounding it.

Thanks to its local Member of Parliament, Narendra Modi, the Prime Minister of India who will inaugurate the Kashi Vishwanath Temple Corridor (KVTC) project on December 13 in Varanasi, alongside families of those who had been displaced due to the project. A sound and laser show on the history of the temple, and its repeated reconstruction from destruction will be part of the event, and the Ganga Ghats will be lit up as in the manner of ‘Dev Dipawali.’

The Hindus in general and Shiva-Bhakts in particular, who wondered if the Vishwanath Temple Vista in Kashi could ever be developed in their lifetime and the “liberator of the Universe” can ever be liberated from the crumbling infrastructure, are infused with pride, gratitude and awe and calling it a moment to cherish our civilizational and cultural glory.

However, there are few agenda-driven propagandists, and also those who wished the continuance of the status quo, are extremely unhappy. Let us look at some of their inconsistent claims:

What was this ‘character’ of Kashi that was being destroyed? Illegal constructions, practically using temples as the pivot and constructing toilets over the level of the Shikhars of the hidden Temples? Or visiting Baba Vishwanath Temple through the narrow, congested, catastrophic filthy lanes? Or Kachori, Samosa, and Longlatta shops with walls of these ancient temples used as a backdrop?

The key to understanding the brouhaha over manufactured falsehood lies in knowing the details of the project.

Over the century, buildings, houses and other construction came up and it left the entire vista obscured, that Rani Ahilya Bai Holkar had once recreated. Some people of Kashi say that the temples were covered because they wanted to save these temples from those who wanted to demolish them. But it is unacceptable that 75 years post-independence, ‘Baba Vishwanath’ continues to rest in a maze of encroachments.

During the auspicious month of Shrawan around 2.5-3 lakh visitors throng the temple (spread in 2700 square feet), while on Mahashivratri, the number goes up to 4 lakh visitors a day. The access to the temple was severely constricted, unsafe and becomes severely unfriendly if one is physically disabled. If you are not a VIP, you hardly catch a glimpse of your revered deity before being forced to move out. Sitting there and praying, was unthinkable.

The KVTC project is by far the most extensive attempt to intervene in the urban setting and historical landscape of the city. The design is both bold and sensitive in scope. While it aims to modernize the functional attributes, it also focuses on strengthening the aesthetic and spiritual qualities of the Shri Kashi Vishwanath Dham.

The KVTC project, spread across Five Lakh square feet is monumental and is now made accessible to tourists and pilgrims through roads and waterways. A new Ganga view gallery is set to provide an unhindered view of the holy river, while a Mandir Chowk will serve as a place for people to sit, relax and meditate and have a memorable pilgrim experience.

The central idea of the project is to preserve the existing heritage structures, provide modern facilities in the temple complex, ease people’s traffic and movement, and connect the temple with the famous Ghats of Banaras through a corridor with direct visibility.

Initially, the project faced resistance when the administration decided to take over 400-odd properties for demolition. Nearly 400 families were asked to vacate without any coercive means, but mutual negotiation. Some also chose to donate their houses as they didn’t want money for that. The legal tenants, customary tenants as well as encroachers, and every person who was physically occupying that space was suitably, handsomely compensated, and will also be joining the inaugural ceremony.

A total of 314 buildings were acquired, and on their clean-up, several ancient Temples, Vigrahas, numerous Shivlings, and various idols mentioned in the Skanda Purana have been found. As per this report, the KVTC will also include the original Parikrama of Adi Vishveshwar Temple and the Gyanvapi well (into which priests jumped with original Lingam when Aurangzeb razed the vista)1.

Until then, where were these activists who knew nothing about these precious imprints of our culture that had been encroached upon? And if that required uprooting some structures and relocating the encroachers, so be it.

The KVTC admin had to get back to the drawing board and revise their architectural plan. The history of each of these temples are researched with the help from ASI and BHU’s Department of culture. The authorities have now decided to throw them open for worship once again. The ASI has already identified 43 of them for prayer and preservation as part of the larger Kashi Vishwanath pilgrimage route, to ensure that all these temples are restored to their former glory.

The grandeur of Kashi taking an enormous facelift can’t wait for the ongoing legal-historical-civilizational dispute to end. Once the project is complete and all these temples are back to their glory, the world would also witness the “Nandi” facing a Mosque. That debate on reconciliation can be taken up from there. If some people are afraid that the KVTC may expose the truth about the exact original location of the Vishwanath Temple, so be it.

False Claim of destruction of Temples

“Not a single temple has been demolished. Every demolition has been recorded with time lag videos, and pictorial evidences. Wherever temples were unearthed, immediately manual labor was used to chisel out everything from the temple. However, some temples were found situated on supple and weak ground without the support of the encroaching buildings. These ancient temples, situated in the path of the corridor had to be temporarily relocated following Vedic rituals till the construction of the corridor, with prior approval of the Kashi Vishwanath Temple Management Trust. After the cleaning of the corridor area all the temples were restored to their original forms by the Shri Kashi Vishwanath Vishisht Kshetra Vikas Parishad.” – Vishal Singh, CEO, Kashi Vishwanath Mandir Trust2.

“As far as mythological and historic conservation is concerned, the idols are all safe and kept carefully and will be reinstalled in the same direction (Disha and Kona) that they were earlier. Most temples didn’t need relocation, but the location of some is bound to change when a transformation of this scale happens.”3 - R N Dwivedi, Mahamantri Kashi Vidwat Parishad.

It clearly suggests that the stakeholders, the saints and seers, the Kashi Vidwat Parishad and also the people of Kashi, have no reservations and were duly consulted at every step.

Read this report on how an 18th-century idol of Maa Annapurna, stolen from Varanasi more than 100 years ago and kept in a Canadian Museum, is brought to Banaras and is now installed at the Kashi Vishwanath Corridor. The credit goes to the relentless pursuit of the Narendra Modi government, which has made “Bring Our Gods Home” a part of his stellar statesmanship. And these loonies have the gall to blame the same government for idol desecration?

This Jagaran report says that the Vigrahas of Sumukh, Durumukh and Pramod Vinayak were removed after recording their GPS location and directional orientation so that they can be restored to their original locations in Kashi Vishwanath Corridor4.

Let me also reiterate here that I myself am a vociferous critic of every government intervention in temples and believe that no sane Hindu would or should appreciate temples being broken or our Devatas desecrated or degraded. Having said that, I have a few common-sense questions for the detractors, which they must delve into, if they are honest about the cause:

There's a logical progression of steps for every issue but surprisingly the protesters did not undertake a single step.

Only the concerted Rudaali (with a political flavour) on the social media is perpetual. Which is very strange and makes it a perfect case of coincidental and inorganic propaganda and anyone can gaze at the ulterior agenda which is to make the vulnerable Hindus feel betrayed by the present ruling dispensation.

The fact is, that to counter the Leftist and Woke Hindu hating narrative, we must unapologetically assert our spirituality, our culture in a manner that it becomes much more attractive for the younger generations. And along with the Ram Temple at Ayodhya, the Kashi Vishwanath Corridor will have a huge impact on Hindu landmass about our glorious past. We have achieved only a bit and there is a long way to go so far in reclaiming our land, our culture, and many of our teerth sthals.

But the hysterical, knuckle-headed, paranoid loonies think that the grand inauguration just a few months before the crucial Uttar Pradesh Assembly elections has significance in terms of cultural politics of the State. Only in India, redevelopment project of a place like Vishwanath Temple and conserving a heritage city like Kashi can also become a political statement.