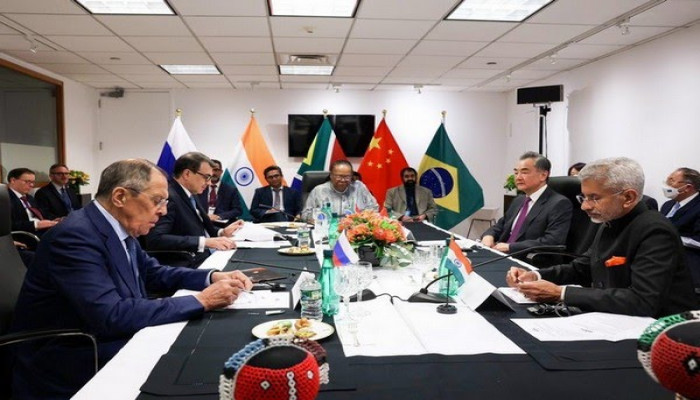 Foreign Ministers from Brazil, Russia, India and China extended their full support to South Africa for its BRICS Chairship in 2023 and also for holding the fifteenth summit.

BRICS foreign ministers held their annual meeting on the margins of the 77th session of the United Nations General Assembly in New York, where the ministers said that they are looking forward to the Standalone Meeting of BRICS Ministers of Foreign Affairs and International Relations in South Africa in 2023.

According to the statement released by BRICS, ministers were briefed on the preparations for South Africa's Chairship of BRICS in 2023.

The Ministers called for the implementation of the 2030 Agenda for Sustainable Development in its three dimensions - economic, social and environmental - in a balanced and integrated manner by mobilising the means required to implement the 2030 Agenda.

According to the statement, "The ministers welcomed the Transforming Education Summit convened by the UN Secretary-General from 16-19 September 2022. They reaffirmed that the BRICS countries are committed to implementing the UN Education 2030 Agenda, promoting education accessibility and equity, accelerating the development of quality education and training, encouraging exchanges among the youths, strengthening the cultivation of knowledge on sustainable development, and providing BRICS contributions for global governance."

The member countries also welcomed the first "BRICS Anti-Corruption Ministerial Meeting," which was held virtually on July 13. The ministers encouraged the BRICS Working Group on Anti-Corruption to strengthen cooperation including experience and information sharing on anti-corruption issues among the BRICS countries on the basis of full consultation and consensus and to explore further areas of cooperation against corruption.

The Ministers reiterated their commitment to further strengthening the cooperation within the BRICS Anti-Drug Working Group in accordance with the existing international drug control regime.

The Ministers, while emphasizing the formidable potential of the ICTs for growth and development, recognized the new possibilities they bring for criminal activities and threats, and expressed concern over the rising level and complexity of criminal misuse of ICTs.

"They welcomed the ongoing work in the UN Open-Ended Ad Hoc Intergovernmental Committee of Experts to elaborate a comprehensive international convention on countering the use of ICTs for criminal purposes and reaffirmed their commitment to cooperating in the implementation of the mandate adopted by the UN General Assembly resolution 75/282," the statement reads.

"The Ministers reiterated the need for all countries to cooperate in promoting and protecting human rights and fundamental freedoms under the principles of equality and mutual respect. They agreed to continue to treat all human rights including the right to development in a fair and equal manner, on the same footing and with the same emphasis. They agreed to strengthen cooperation on issues of common interests both within BRICS and in multilateral fora including the United Nations General Assembly and Human Rights Council, taking into account the necessity to promote, protect and fulfill human rights in a non-selective, non-politicised and constructive manner and without double standards," the statement added.