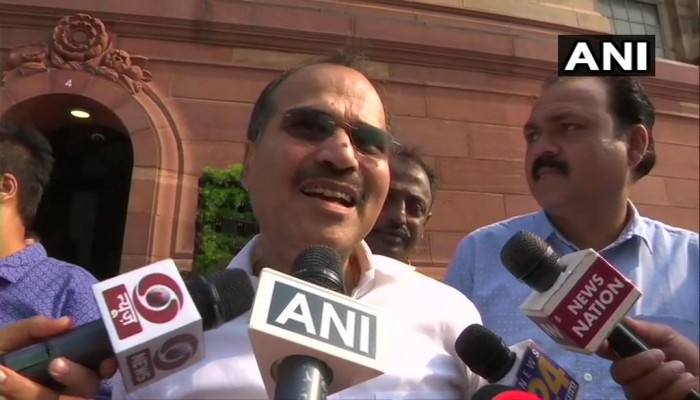 Ever since the outbreak of the Coronavirus, world over, the China bashing narrative has gained momentum and become a hobby. Amidst that, scuffles were reported in the first week of May on the Indo-China border near Sikkim between army men on both sides. And immediately thereafter, senior Congress leader and opposition spokesperson in the Lok Sabha, Adhir Ranjan Chowdhury, has now asked the PM to accord to Taiwan the diplomatic recognition it deserves.

One would’ve thought that Mr Chowdhury’s plea was designed to add to the anti-China rhetoric at an opportune moment, to align with the nation’s mood.

Well, I would think not quite. His statement would’ve surely rubbed China the wrong way, but instead, it seemed to have caused an instant discomfiture to his own party. Congress was quick to dissociate itself from its leader and stated “That may be Mr. Chowdhury’s personal views. The Congress recognizes the special partnership between China and India”!

Motor mouths exist everywhere but how to contain them, so that they don’t dent the party’s brand, is a universal problem.

On that, the BJP ought to have bigger problems given - a) it is the second largest party in the world, trailing only the Communist Party of China and b) it is not a “family-owned” party.

BJP has a colossal army in which who-says-what cannot be practically monitored, more so due to its democratic set-up that allows anyone to express thoughts uninhibited. Notwithstanding that, the headline hunting media has seldom incriminated any senior party members (of the rank of say, BJP’s National Executive Committee or a Chief Minister or any Central Minister) for speaking out of turn in contradiction with the party character. With an inability to denigrate members holding important posts, who all seem to echo PM Modi’s “India First” ethos, the media has had to do with virulent attacks on lower level party representatives for that odd distasteful remark or on MPs with no portfolio. They do so in a sensationalist manner to run their business empire with high TRPs. Nevertheless, there is still a top-down percolation of ideals and an overall sense of unison within the BJP, at least in a broad sense.

By comparison, the Congress party led none other than the listless Rahul Gandhi has become a comedy of contradictions, despite reducing in size and being, if you may, a “Pvt Ltd. Enterprise.” Monitoring members ought to be a wee bit easier given the hegemony of the Gandhi family, and yet, incendiary remarks or actions by essential members are evident even on matters of grave national importance.

Recall that even in the midst of the turbulent Doklam standoff, Rahul Gandhi found it prudent to go to the Chinese embassy to get a firsthand report in hopes of pinning evidence against Modi, that he perhaps imagined the latter was suppressing. Even at a time when the situation was near war-like, his priority was – ‘India Second, Politics First’.

Not that he found any implicating evidence but what was far more important to note was his inability to prioritize even in critical matters of national interest. His inability to grasp the sheer gravity of a war-like situation, where the ‘enemy’ is often inclined to use him as a pawn rather than extend well-intended support, is baffling. As is his lack of nuance, wherein a white lie of sorts at such a delicate juncture would have been perfectly permissible so that what hung in balance was the high moral of the soldiers.

Sadly, the Congress in its journey has all too often muffled honesty and subverted authority only to perpetuate its’ own vested interest.

It all begs the question - why?

Swapan Dasgupta recently pointed out, that whilst Nehru’s momentous independence speech ‘Tryst with Destiny’, talked of "A soul of a nation, long suppressed"; he never bothered to explain what the suppression was. It remained a speech writer’s speech.

On the contrary, Nehru let the British narrative take grip in the Indian psyche, that they peacefully and willingly transferred power of India to the Indians, thus conceding some moral high ground in favor of the imperialists. He then set the “soft state’s” tone, when he shockingly rejected an offer by Russia of an independent India to be a part of the permanent members’ coveted circle with veto powers at the United Nations, thus opening way for China to seize the moment. And so neither Nehru nor any of his progeny did much by way of speaking up for the nation’s soul. The very suppression of the story of the suppressed soul diluted and took away from the oppressor’s sense of guilt for its many appalling actions. It also didn’t allow for advocating India’s cause and her rightful place amongst a community of nations.

For that righting-of-a-wrong, the country had to wait till 2014 for Narendra Damodardas Modi to take center stage and reinvigorate modern India, simultaneously invoking her rich ancient civilizational values and alluding to a glorious past that was an antecedent to the idea of India.

And that’s when the chickens came home to roost for the Congress party.

As Swapan Dasgupta aptly points out, an interesting fallout is that today nobody seems to believe that the slogans - "Bharat-mata Ki Jai” or “Vande Mataram" were once associated with the freedom struggle led by Congress! Crowds chanting these patriotic slogans raised placards depicting imagery of a sari-clad Mother-India, resembling venerable Hindu Goddesses. The post-independence Congress had entered the political arena, enjoying the love of the common people owing to its presupposed brand of nationalism backed by the Hindu majority.

The Congress was practically living in an indefatigable fort.

But over time, and by its own doing, it began eroding its brand and lost the support of both the nationalists and the Hindus.

For the lust for power, under the watch of President Fakhruddin Ali Ahmed, Indira Gandhi not only thrust the nation into an unfounded national emergency, she even tinkered with the constitution to create a platform for divisive communal politics. The word ‘Secular’ was inserted into the constitution without discussion or debate, not for the spirit of the word but for the opportunity it provided through vote banking.

In line with the kind of legacy it passed on down the generations, today’s Congress now not only shows a soft corner for China, but is seen playing the Pakistani cards too.

The senior Congress ministers have been caught in discreet meetings with the Pakistani establishment and just like our western neighbor, the Congress accusingly levies the label of "Hindu-nationalist" to the BJP, echoing the hollow politicians across the border.

In doing so, does the Congress not realize how much of a self-goal they score? Sadly, they are guilty of what they accuse the BJP of – divisive politics. The message they then seem to cement, is that it is the party mostly for non-Hindus and non-nationalists and so ends up falling into the hands of the fringe located on political extreme right.

As if that is not enough, for reasons known only to them, its senior ministers are regularly in the news for the wrong reasons, often standing shoulder to shoulder with the fringe or with those who chant seditious slogans, treating issues of national security either facetiously or with comical exaggeration.

Not cognizant of the fact that flip-flops lead to brand erosion, it is often seen contradicting itself in a rather consistent way and with much tomfoolery. On one end, it was seen leading a supposed coalition of all ‘secular’ parties under the umbrella of United Progressive Alliance and then on the other, it commissioned the infamous Sachar Committee to learn of the welfare of only the Muslims in India. It would accuse BJP of discriminating and dividing the nation along communal lines but their tallest luminary Manmohan Singh was shockingly heard promulgating that it was Muslims who had the foremost right over the natural resources of India.

And so, after it’s debacle in the 2014 elections, it fell upon the senior Congress leader AK Anthony, to create a report that contained a detailed inquest into Congress’ resounding defeat. A Christian minority himself, he concluded that the humiliation of the party was due to lack of uniform clarity and a disproportionate amount of minority appeasement, a now open secret.

As if to prove to the public that the party had learned its lesson, Rahul Gandhi made himself a party mascot of a good learner. He temporarily yielded to image makeover tokenism. To disprove the allegation that his party’s only strategy was vote banking on the Muslims, he comically began to publicly flash his janeu (the sacred Brahminical thread) and indulged in bit of temple hopping for the public to see.

The comedy in contradictions was complete, when in the 2019 national elections, he again went back to his unconscionable ways and in contravention to AK Anthony’s report findings, decided to abandon the family bastion in Hindu majority Amethi and took refuge in the Muslim heavy Wayanad district. The clowning got elevated when instead of demonstrating maturity by supporting India’s attempt of checkmating the Chinese threat, he ran a baseless but shrill election campaign by calling PM Modi names for expediting the purchase of the much-needed state of the art fighter jets from France.

In the final reckoning, Democracy is not about wishful thinking. It is hard work, one in which the voters can never be taken for granted. The system is about the art of the possibility. Only the arithmetic in the parliament decides what bills can pass, not what is perceived to be ideal. To get the numbers in parliament, it’s imperative to put up winnable candidates. And finally, these candidates need to be the custodian of the party’s aspirational brand and project it to the people. A brand with which voters can easily get aligned.

However, when the very senior most inhabitants of the fort begin to consistently damage from within, no structure can then protect the entity, no matter how tall the protective walls or how wide the surrounding moat.

That at one-time Congress’ solid brand was of a party of freedom fighters backed by all and sundry including and especially the Hindu majority – may be a veritable fact. But today, it feels stranger than fiction. It has made itself into a pitiable weakling by throwing away its most powerful Brahmastra - the united India’s nationalist brand.

So, before Congress accuses BJP of any particular ideology, it must first look in the mirror and ponder: Didn’t the BJP appropriate and usurp the Congress’ own ideology? Or was it gifted to the BJP by the Congress’ own senior most leaders?