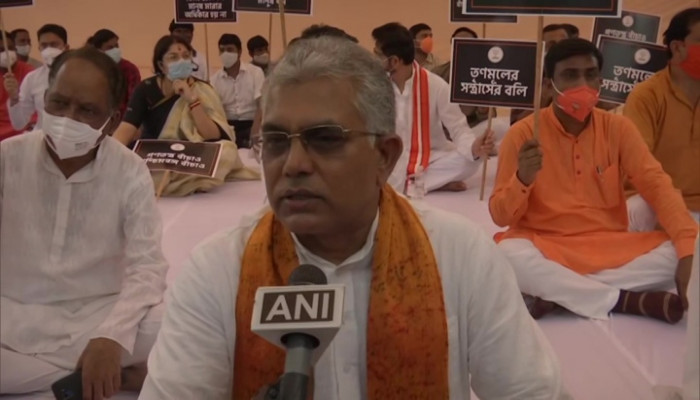 This comes after the National Human Rights Commission of India (NHRC) released its report on post-poll violence on July 15 to the Calcutta High Court.

"As a tribute to our 175 workers who died due to TMC violence, we are protesting here," said Dilip Ghosh, BJP West Bengal chief.

Boldly taking on the Trinamool Congress, Dilip Ghosh said "Martyrs’ Day is not TMCs but of Congress. Along with this day the TMC supremo has brought in the corruption of the Congress in TMC. Almost 174 BJP cadres have died in last few years due to TMC’s violence and today we are showing our respect to our dead workers."

“The TMC shedding crocodile tears had promised that they will stop the violence of the CPI (M), but they had just broken the Left Front records and increased the violence in the state. False cases are being slapped on the BJP workers every day and the TMC supremo is saying that there is no post-poll violence in Bengal,” claimed the BJP West Bengal chief.

Ghosh added, "We are protesting to put an end to the atmosphere of violence in politics in West Bengal."

BJP is resolute to fight to save democracy in Bengal. We can never forget the sacrifices of our workers and BJP will fight all the atrocities of the Trinamool Congress. What else to expect from a party accused of fanning violence and lawlessness,” said Suvendu Adhikari, Leader of Opposition.