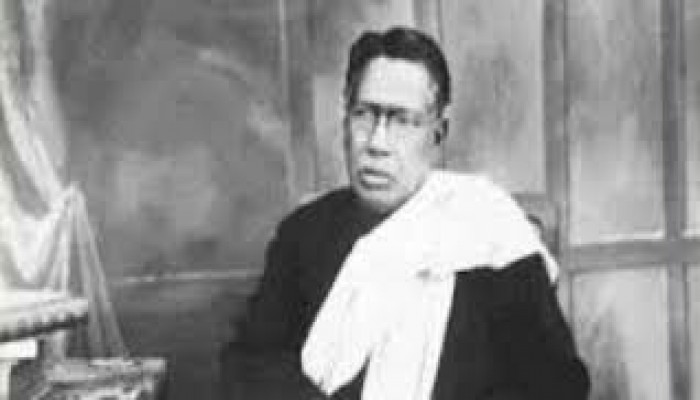 He was feared by the British and the moderates within the Congress. He was Called the "Father of Revolutionary Thoughts" who demanded Poorna Swaraj and nothing less.

The author of "Europe Asks: Who is Shree Krishna". Remembering the one and only Bipin Chandra Pal, on his Punyatithi on May 20th.

Along with Lala Lajpat Rai and Bal Gangadhar Tilak he belonged to the Lal, Bal, Pal trio that was associated with revolutionary activity to gain independence from the clutches of British. Bipin was born on November 7th ,1858 at Sylhet, in today’s Bangladesh.

Between 1905-1920, India buzzed with the cry of Poorna Swaraj, Swadeshi, boycott and the educational reforms. The triumvirate of Lala Lajpat Rai, Bal Gangadhar Tilak and Bipin Chandra Pal shook the conscience of the masses with oratory, vision and action. The Moderates, who had controlled the levers of Congress from its inception since 1885, became a side story in people’s mind during these 15 years.

In an article in "Bande Mataram" dated September 18, 1906, he wrote: "If we may not oppose physical force by physical force, we may yet make the administration in India absolutely impossible any day. Our ideal is freedom, which means absence of all foreign control. Our method is passive resistance which means an organized determination to refuse to render any voluntary and honorary service to the Government".

Most of us know British divided Bengal in 1905 on the basis of caste, but do you know Pal, along with Lalaji and Tilak, was instrumental in ensuring ruling British didn’t meet with their objective and were forced to reunite Bengal only six years later in 1911.

He travelled around the country and created a wave of resistance among the masses with his subliminal oratory. Boycott wasn’t limited to British goods alone; it extended to even British public institutions. Groups and committees, gatherings and demonstrations, and rousing speeches had the country inflamed. The more British tried to repress the wave the more intense it grew.

British unleashed a brutal crackdown on the Extremists. Bandemataram newspaper was closed. Tilak was banished to Mandalay jail for six years, Bipin was arrested for not giving evidence against Sri Aurobindo. The British followed up this measure by bedding up to Muslims and the Moderates and took the wind out of India’s resistance movement.

All these happened, when hardcore patriots asked for Independence and threatened Boycott of British at Calcutta session.

Bipin Chandra Pal literally and figuratively carried the message of Boycott Movement and Swadeshi Movement from Province to Province. In January 1907, he set out on a long tour of East Bengal, Allahabad and Benares in the United Provinces, and down south to Cuttack, Visakhapatnam, Kakinada, Rajahmundry in and finally Madras.

Bipin delivered five lectures at the Madras Beach from May 2, 1907 to May 9, 1907 wherein he expounded the philosophy, goal, program and strategy of the national movement in considerable detail in the presence of Maha Kavi Bharathi, Subramania Siva and Srinivasa Sastry.

On August 12, 1901, Bipin Chandra Pal started an English Weekly called "New India". In its inaugural issue, as founder-editor, Pal declared its ideals in stirring tones: "Its stand point is intensely national in spirit, breathing the deepest veneration for the spiritual, moral and intellectual achievements of Indian civilization and distinctly universal in aspiration". "New India" focused primarily on the economic and educational reconstruction of India with special emphasis on cultural regeneration rather than lopsided political agitation alone.

Bipin returned to Congress and soon he made a scathing attack on Gandhi in the 1921 session. “You wanted magic. I tried to give you logic. But logic is in bad odor when the popular mind is excited. You wanted mantaram, I am not a Rishi and cannot give mantaram…I have never spoken a half-truth when I know the truth…I have never tried to lead people in faith blind- folded.” Comparing Gandhi with Leo Tolstoy, Pal noted that Tolstoy “was an honest philosophical anarchist,” while Gandhi to him was a “papal autocrat.”

In 1920, Pal was among the senior Congress leaders who opposed Gandhi’s resolution on non-cooperation over the fact that it didn’t address self-government. After his first wife passed away, he married a widow and joined the Brahmo Samaj, which, among other things, denounced the caste system. He was also an ardent proponent of gender equality.

Besides Vandemataram and New India, as a journalist, Bipin worked for Bengal Public Opinion and The Tribune where he propagated his brand of nationalism. He wrote several articles warning Bharat of the changes happening in China and other geopolitical situations. In one of his writings, describing where the future danger for India will come from, Pal wrote under the title "Our Real Danger".

But Bipin Chandra Pal's death was tragic. He wanted to remove social evils and arouse the feelings of nationalism through national criticism. He had no faith in mild protests in the form of Non-Cooperation with the government. But most Congressmen were sucking up with Gandhi.

But one thing readers must remember, since the start of 18th century, regular armed struggle against British was the main reason for India gaining independence and not eye washing stunts called Ahimsa/Satyagraha.