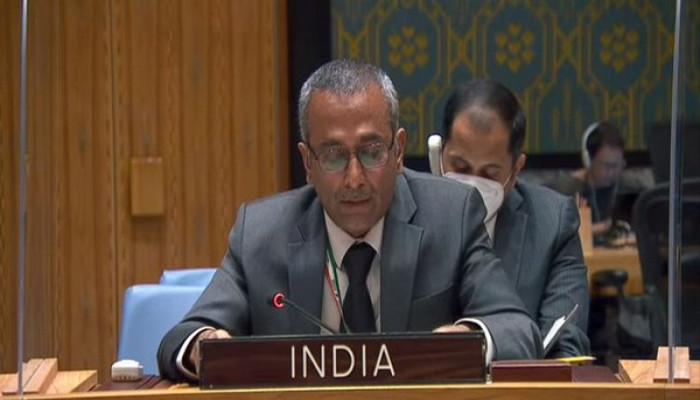 As the Russia-Ukraine war persists unabated, India at United Nations Security Council (UNSC) on Friday, May 13, emphasised the significance of the Biological and Toxin Weapons Convention (BTWC) as a key global and non-discriminatory disarmament Convention.

Speaking at a UNSC briefing on Ukraine, India's Deputy Permanent Representative to the UN, R Ravindra, stated that they believe that any matter pertaining to the obligations under the Biological and Toxin Weapons Convention (BTWC) should be addressed. India at UNSC maintained that they continue to remain deeply concerned regarding the worsening crisis in Ukraine.

During the UNSC briefing R Ravindra said, "India attaches high importance to the Biological and Toxin Weapons Convention (BTW) as a key global and non-discriminatory disarmament Convention, prohibiting an entire category of weapons of mass destruction. The Convention contains binding obligations on States parties to never develop, acquire, stockpile or transfer biological agents for purposes other than peaceful. We support full and effective implementation of the BTWC in letter and spirit."

He further added “We also believe that any matter relating to obligations under the BTWC should be addressed as per the provisions of the Convention and through consultations and cooperation between the parties concerned”.

R Ravindra stated that India has been underscoring the requirement for negotiation of a comprehensive and legally binding protocol, which allows effective and non-discriminatory verification to bolster the implementation of BTWC by states parties.

He pointed out India’s concern about the worsening situation in Ukraine.

“We have been consistent in calling for the cessation of hostilities and pursuing the path of diplomacy and dialogue to address the situation. In this regard, we support the efforts of good offices of the Secretary-General,” said Ravindra.

“It is important to undertake these efforts keeping in mind the need to respect the principles of the UN Charter, international law and sovereignty and territorial integrity of States,” he added.

A day earlier, India had reiterated its stand for diplomacy amid the Ukraine conflict and said humanitarian measures should not be politicized at a time when the impact of the situation on the education of children has been severe.

R Ravindra highlighted the importance of efforts that need to be made in order to respect the principles of the UN Charter, international law and sovereignty as well as the territorial integrity of member states.