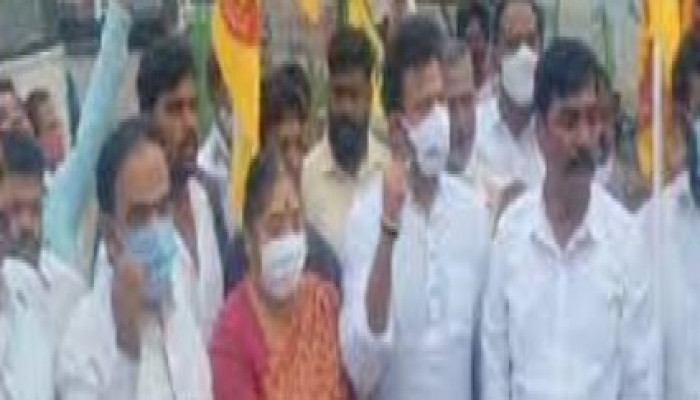 Andhra Pradesh police arrested many Telugu Desam Party (TDP) workers on Wednesday who were protesting vandalism at the party's headquarters in Mangalgiri, Guntur district. A group of TDP members and workers from TNTUC (Telugu Nadu Trade Union Council) were also detained by police today. According to the police, protests and a bandh were not approved.

TDP leader Lingareddy has also been placed under house arrest in the Kadapa district. On Tuesday, the TDP's Mangalagiri office and K Pattabhi Ram's Vijayawada residence were vandalized. Kommareddy Pattabhi Ram, TDP's national spokesman, had conducted a press conference in which he criticised YS Jagan Mohan Reddy and the state government.

A bandh was declared in Andhra Pradesh on Wednesday in response to the attack on the TDP's offices and workers, with N Chandrababu Naidu blaming protesters from the Yuvajana Sramika Rythu Congress Party (YSRCP).

Former Chief Minister and leader of TDP alleged that YSRCP cadres attacked TDP offices and leaders in the state on Tuesday. He claimed to have mailed Home Minister Amit Shah and called up Governor Biswa Bhushan Harichandan apprising them of the attack. According to Naidu, Shah promised to investigate the matter and demanded that a formal police complaint be filed.

Naidu has also called for an in-depth investigation into the attack on the TDP offices, as well as the use of Article 356 of the Constitution to impose President's Rule in the state. According to the former Chief Minister, the state has become a breeding ground for ganja cultivation and drug trafficking.

At a press conference on Tuesday, Chandrababu Naidu described the ruling YSRCP attacks on their party headquarters as "state-sponsored terrorism" on democracy and a heinous attempt to silence the voice of Andhra Pradesh's main opposition TDP. The YSR Congress Party, on the other hand, has denied any role in the attacks. "The YSRC party has nothing to do with the attacks. Making such abusive statements against a loved CM and leader could have provoked fans of our beloved leader but the party has absolutely nothing to do with what unfolded," YSR Congress Party said in a statement.