Anti-Hindu conference being force-fitted into the "academic" category 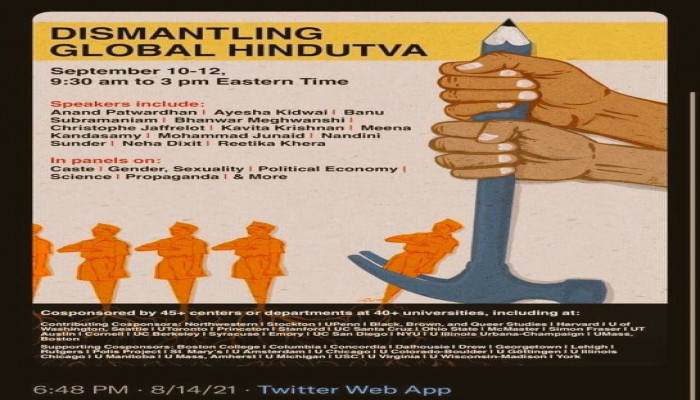 I am a mother, teacher and a practicing Hindu. This means that I am aware of what Hindutva is just as much as every practising Hindu is - which is over 80% of all the Hindus living all over the world. Yes, we live all over the globe carrying with us our Hindutva, contributing to the country that we make our home and, as per Hindutva, NEVER indulging in mobbish behaviour of violence and hate. NEVER - we never have in all of history and we never will in future as long as we hold to Hindutva. There is no need for me to even mention this when there must have been hundreds, if not thousands, of Hindu students who have been in your university and added glorious pride to your reputation! You are also seeing thousands of Hindus living in your country, working or studying hard, polite and gentle in behaviour and sincere in their service. So, I take it that you know all this first-hand!

It is Hindutva that saw us through a thousand years of foreign invasion and rule during which time we were subjected to genocidal tortures of the greatest magnitude. No, these will never be spoken about in history lessons although evidence is present all over to ratify this. You can still see broken temples that stand testimony to the hate and violence that we were subjected to just because we are Hindus. Yes, Hinduphobia is not new, it did not begin with modern academia, it began even before the first invaders landed here in India. They hated us because they were jealous of our knowledge, of our prosperity, of the fact that we knew how to manage our personal and social lives beautifully. They wanted to take away all these from us.

The first set of invaders - brutish, uncivilised, relying on food power - used violence as their primary force against us. We were taken unawares because we were used to playing by the rules while they, the cowardly cheats hit us from the rear! We fought them; but for a few intermittent decades, they were kept well under check. The Hindu did not yield to change his ways as there was nothing to look forward to in the newcomer's ways of life!

Then came the ones - the ones who viewed people by the colour of their skin(!) and placed their colour above all others - although they could adore their horses, kittens and puppies that were of all colours - who starved and bled our nation of ALL resources including the thumbs of master craftsmen (yes, I mean the real physical thumbs that were cut off so that they could not continue with their craft). This time we were taken unawares because we never knew racism until then. We fought them too and we won.

And now we have these people - of the category that is going to speak at the anti-Hindu gathering - who are not practising Hindus but who hold deep contempt for Hindus by way of indoctrination that has no real basis. At worst, they can cite a handful of stray and minor incidents that do not in any way represent Hindutva - these incidents did not grow in size; they did not even repeat themselves in the same place or in other places! And each of the incidents have had suitable legal action taken by the responsible governments. The victims of these incidents would number scarcely into the double digit. That, in a country of 1.3 billion (which is a 10-digit number), is possible because Hindutva doesn't venture into such mindless mob violence!

Hindutva means 'Hinduness' and is an ancient cultural system which all of us adhere to in order to evolve as human beings. Having a Central Government that calls for Hindutva to be followed at all times is good for the country whose population is now being quickly influenced by things novel and misleading and which might lead to individual and social disharmony.

This is not stated in a self-aggrandising manner but I can show the kind of mal-content that each one of the invited "academic" speakers create. I can prove with evidence that their points of anti-Hindu [or anti-Hindutva] propaganda are all false! When I did this to one of the speakers on Twitter and waited for her to respond, she simply blocked me! Isn't that WOW for somebody who calls herself an academic?

We are sure that your university, with its reputation, wants to stand for the truth.  You want to benefit the world. This is why you hold conferences. You do not want to come across as a university that, during the twenty-first century, backed speakers who were propagating falsehood. Such contestable conferences must be made into open debates instead. The debaters can follow pre-set and mutually agreed upon rules to follow and the outcome of the debate can be based on the verifiable evidence that we provide. If you want entries, I am ready to be one of those that debate any one of the speakers. If there is an open invitation, it won't take much time for you to get others who would be willing to debate. Do consider this suggestion. Otherwise, please do not conduct the conference.