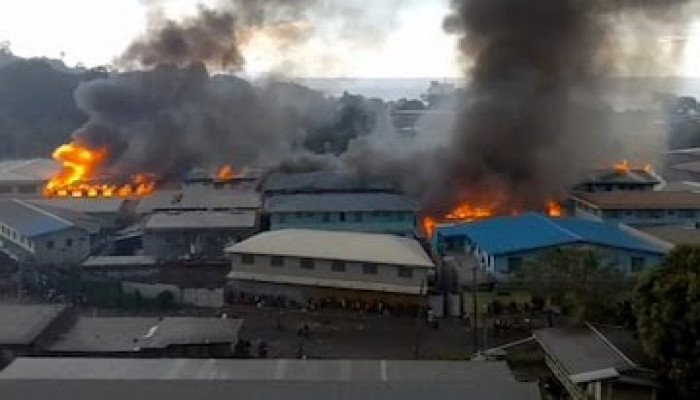 Violent protests erupted for a second day in Solomon on Thursday targeting parliament, Chinese businesses and other buildings.

To disperse the large crowds, police in the Solomon Islands used tear gas and rubber bullets on Wednesday after the crowd gathered at the gates of parliament, demanding the resignation of Sogavare.

However, despite the civil unrest, Prime Minister of the Solomon Islands Manasseh Sogavare remains defiant that he will not step down and will stand by his decision to terminate diplomatic relations with Taipei. This further sparked the tensions in Honiara.

"That decision is a correct decision, it is legal, it puts the Solomon Islands on the right side of history and it is in line with international law," he told ABC.

Sogavare said his government was still in control. “Today I stand before you to inform you all that our country is safe – your government is in place and continues to lead our nation,” Sogavare said on Thursday, adding that those responsible would “face the full brunt of the law”.

Most of the protesters in Honiara are reportedly from the neighbouring island of Malaita.  Sogavare angered many in 2019, particularly leaders of Malaita, Solomon Islands’ most populous province, when he cut diplomatic ties with Taiwan, switching diplomatic allegiance to China instead.

The protesters defied a 36-hour lockdown imposed in the wake of Wednesday’s unrest and took to the streets again on Thursday. Thousands of people were out on the streets. Banks, schools, police stations, offices and Chinese-owned businesses were among the buildings reportedly torched and, in some cases, looted.

Amid the riots, Australia said that it is deploying more than 100 police and defence force personnel to Solomon Islands. The Australian government said the deployment would support “riot control” and security at critical infrastructure.

Canberra said the move was in response to a request from Sogavare under an existing security agreement between the two countries, and should not be seen as taking a position in Solomon Islands’ internal affairs.

Morrison said it was a time to support “our Pacific family”. But he also strongly said that Australian personnel would stay away from the parliament and the executive buildings of the government, as guarding those facilities was a task for the Solomon Islands police force.

“We have received reports of more buildings burning on the main road in the centre of Honiara, including a large commercial building and a bank branch, and increasing numbers of people on the streets,” Morrison told reporters in Canberra.

He added, “It is not the Australian government’s intention in any way to intervene in the internal affairs of the Solomon Islands – that is for them to resolve. I’ve made that very clear.”

In Beijing, the foreign ministry spokesperson, Zhao Lijian, expressed “grave concern” and called on the Solomon Islands government “to take all necessary measures to protect the safety of Chinese citizens and organisations”.

Solomon Islands, an archipelago nation of around 700,000 people, has struggled repeatedly with ethnic tensions and political violence since gaining independence from Britain in 1978.

Australia led an international police and military force called the Regional Assistance Mission to Solomon Islands that restored peace in the country after bloody ethnic violence from 2003 until 2017.