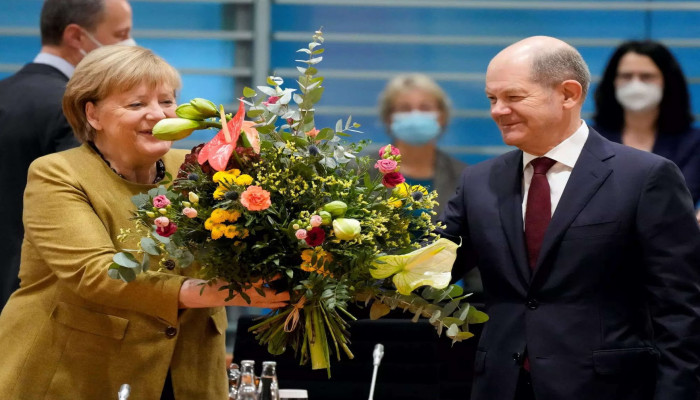 German Chancellor Angela Merkel's successor has been announced on Wednesday and Olaf Scholz, Germany's finance minister and vice chancellor will now take over as chancellor.

Merkel has been Germany's leader since 2005, becoming known as Europe's de facto leader and the world's most powerful woman.

Merkel stepped down as the leader of the Christian Democratic Union in 2018 after 18 years at its head, but continued to lead the country as chancellor after saying she would so do until the end of her term. She announced in October 2018 that she would not run for re-election in 2021.

She has been serving as acting chancellor since September, while the parties negotiated on the future government.

According to Associated Press, Scholz said he expects the government to approve the deal that would make him chancellor within the next 10 days. The government has been planning to make the change on the week of December 6, as per Süddeutsche.

The three parties had been negotiating for the past two months, trying to agree a coalition deal so Merkel could be replaced after the September general election. Merkel's party, the Christian Democratic Union, is set to be the opposition party. Scholz's party, the Social Democrats, won the most votes in the September election.

Merkel held her last cabinet meeting on Wednesday, and was pictured being presented with flowers from Scholz.

A day after new chancellor was announced, Merkel labelled Thursday “a very sad day'' and backed calls for more restrictions, as her country became the latest to surpass 100,000 deaths from Covid-19 since the pandemic began.

The national disease control agency said it recorded 351 deaths in connection with the coronavirus over the past 24 hours, taking the total toll to 100,119. In Europe, Germany is the fifth country to pass that mark, after Russia, the United Kingdom, Italy and France.

“It is of course a very sad day that we have to mourn 100,000 victims of the coronavirus,'' Merkel said at a news conference in Berlin. “And unfortunately, at the moment, more than 300 deaths are being added to that each day.''

“The situation is so serious because we are still in an exponential growth and because the cases that we see getting sick today are basically the patients who will be in intensive care in 10 or 14 days,'' Merkel said.

She welcomed an announcement by Germany's government-in-waiting on Wednesday that it will create a new permanent expert group to advise officials on how to tackle the pandemic.