Amit Shah raises issue of attacks on minorities, temples in Bangladesh with counterpart 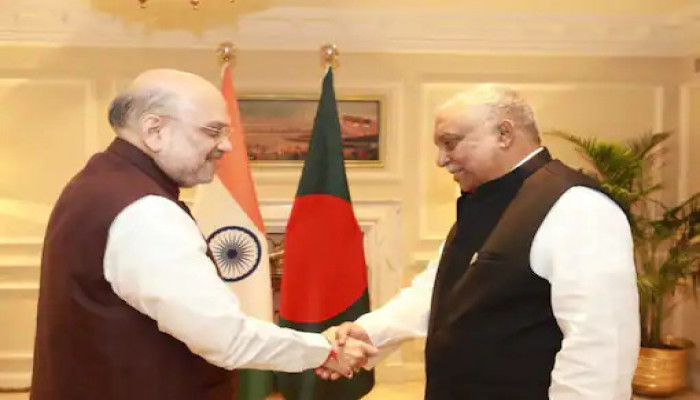 Union Home Minister Amit Shah met his Bangladeshi counterpart Asaduzzaman Khan on Friday and raised the issue of attacks on minorities and temples in Bangaldesh.

The two leaders had a productive exchange on border management and common security-related issues on the sidelines of the ‘No Money for Terror’ conference in Delhi. Shah brought up how attacks on the minority Hindu community were on the rise in Bangladesh, alongside incidents of temple desecration, official sources said.

“Union Home Minister @AmitShah met H.E. Asaduzzaman Khan, the Home Minister of Bangladesh on the sidelines of the ‘No Money for Terror’ conference. Both sides had productive exchanges on border management and common security-related issues," Shah’s office tweeted.

Khan is attending the third ‘No Money for Terror Ministerial Conference on Counter-Terrorism Financing’ hosted by the ministry of home affairs. The two-day conference, which began on Friday, is being attended by 450 delegates from over 75 countries and international organisations. Officials said Pakistan and Afghanistan were not taking part in the conference while China was invited but did not come.

According to his office, Shah also met Binalf Andualem, who is the minister of peace from Ethiopia, and discussed bilateral, multilateral and regional issues of mutual interest.

Speaking at the summit earlier in the day, the home minister said while terrorism was a serious global threat, terror financing was more dangerous. He said to achieve the goal of the conference, the international community must understand the “mode -medium-method” of terror financing and adopt the principle of ‘one mind, one approach’ in cracking down on it.

“The transformation of terrorism from ‘dynamite to metaverse’ and ‘AK-47 to virtual assets’ is definitely a matter of concern for the countries of the world. And we all have to work together to formulate a common strategy against it,” Shah said, adding that terrorists were now using the darknet to spread radical content and conceal their identities.

“Additionally, there is an increase in the use of virtual assets like cryptocurrency. We need to understand the patterns of these darknet activities and find their solutions,” he said, adding, “I believe that financing of terrorism is more dangerous than terrorism itself because the ‘means and methods’ of terrorism are nurtured from such funding. Financing of terrorism weakens the economy of countries.”

Shah further said there were countries that “seek to undermine, or even hinder, our collective resolve to fight terrorism”.

“We have seen that some countries protect and shelter terrorists. Protecting a terrorist is equivalent to promoting terrorism. It will be our collective responsibility that such elements never succeed in their intentions,” he said, adding that no one should ignore terrorist safe havens or their resources.

“We also have to expose the double-speak of such elements who sponsor and support them,” he said.