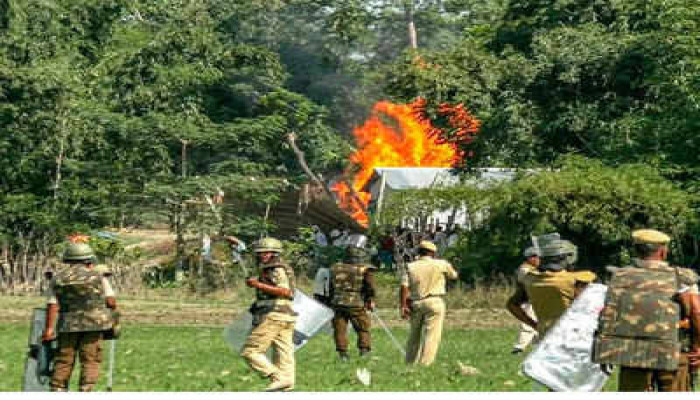 To protest the killing of two civilians during an eviction drive, Assam Minorities Students' Union, Jamiat and a few other organizations have jointly called a 12-hour bandh in Darrang district of Assam. During the eviction drive, 11 people were also injured.

The eviction drive was being conducted in a region largely inhabited by Bengali-speaking Muslims.

The controversial eviction was first mooted when Sarma visited the area on June 7 and instructed the district administration to clear the area occupied by “illegal settlers” for a community farming project for young people hailing from the state’s indigenous communities.

The evictions began at four places in Dholpur on Monday, and nearly 800 families – most of whom were Bengali-speaking Muslims – were removed from 4,500 bighas of government owned land. The district administration cleared 602.04 hectares and demolished four “illegally” constructed religious structures at Sipajhar, officials said.

In the video, which was shot on September 20, during an eviction drive by the state government against illegal encroachers, a man, allegedly an illegal settler, is seen charging with a stick in hand towards a group of policemen. They shoot him in the chest and then brutally thrash him.

The video has stirred outrage across social media platforms.

What was more shocking in the video was that a photographer, who had been engaged by the district administration, was kicking and punching the unconscious man on his chest.

During a press conference, the joint committee of the organizations said they have demanded the state government and administration to give Rs 10 lakh to the kin of each of the deceased persons and Rs 5 lakh to each of the injured.

The state government has ordered a judicial probe into the circumstances leading to the violent clash between policemen and the civilians during the eviction drive.

Police said a mob of nearly 2,000 people attacked personnel during the eviction drive at Dholpur village in Sipajhar, forcing security men to lathi charge the crowd and open fire, resulting in the deaths and injuries.

But visuals of the incident showed scores of policemen firing at unseen targets behind a mass of trees, huts and chaff, and a man in vest and lungi chasing a policeman and a photographer -- a man employed with the district administration -- down a dusty slope.

Groups of policemen are then seen surrounding the local resident, who suddenly collapses to the ground due to an apparent gunshot, raining him with blows of the stick, with gunfire in the background.