A Rebuttal to Chetan Bhagat's Illogical Outburst on the Indian Economy 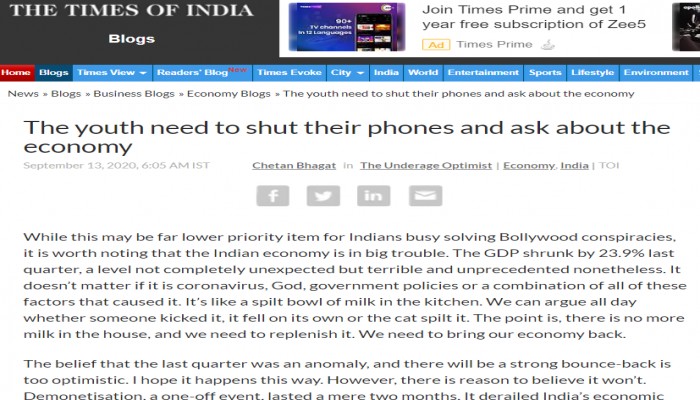 If you write an article criticizing the Narendra Modi government, it is natural and obvious that people like Shashi Tharoor will like the article, tweet about it and write some nice words about it. It was therefore surprising that someone like Chetan Bhagat was over the moon that “the Shashi Tharoor” liked his article!

It has been a long time since I read any article of Chetan Bhagat, so I thought maybe this is overdue and proceeded to read his article that was pompously titled “The youth need to shut their phones and ask about the economy”.

It’s actually difficult to take any article seriously that starts with saying that demonetization has “derailed India’s economic growth momentum for years.” For a man of Chetan Bhagat’s stature, one would expect that some statistics are presented to explain this (or any) case, but he doesn’t. The entire article follows this path – make lofty and hefty statements without the backing of a single statistic. It is therefore no wonder that the likes of Shashi Tharoor loved this article.

For example, by the end of 2017, One year after demonetization, India’s quarterly GDP growth rate was at 8.2%, nearly close to what it was the quarter before demonetization. How then would intellectuals like Chetan Bhagat and Rahul Gandhi continue to blame demonetization for reduction in growth in late 2018?

It’s further difficult to take any article seriously if it proudly mentions the economic stimulus package of the USA but doesn’t even squeak about the massive 21 lakh crore package announced by the Prime Minister of India. Because it is in this same article that the author derides Indians by telling us that “We, the Indians, are desperate to feel validated that we are good enough.” I don’t know about the “desperation” of fellow Indians, but it sure looks like the author is desperate enough to feel so good about what the USA did and ignore what our country has done.

Chetan Bhagat sermonizes that “The first step is to acknowledge the problem.” Oh, where would we have been without such a massive piece of advice? A package of INR 21-lakh crore to revive the economy was announced without acknowledging the problem? Nearly INR 70,000 crore was given to 42 crore citizens of our country as part of the “Pradhan Mantri Garib Kalyan Package” – this was planned and distributed without acknowledging that there was a problem? I can cite more statistics that shows the acknowledgement of the problem but there are more points from the original article that I wish to discuss further!

The latest fad on social media is to deride the lockdown. Chetan Bhagat merely follows this trend, yet again without the backing of a single statistic. While citizens have understood the need for a lockdown early, intellectuals still don’t seem to get a handle around why an early lockdown actually helped India. Citing today’s high number of cases, without a proper context, is the forte of these intellectuals. If we didn’t have a lockdown, our doubling rate would have been worse. Doomsday predictions in March indicated that we will have 3 crore cases by July. I am willing to bet that this same Chetan Bhagat and Shashi Tharoor would have been on the forefront writing articles about how Modi was not brave enough to impose a lockdown in our country to prevent the COVID impact!

I continued to read the article to see if it gets any serious. And then I read this suggestion – “Open the economy up. Like really.” What does this even mean? Why couldn’t he give one, just one concrete example of what he thinks the government should do to “open the economy up”? Who writes likes? Like really!

And then comes to killer paragraph – “At an immediate level, the government needs to give a real fiscal stimulus. As a poor nation, we can’t have a big stimulus. But whatever it is, it has to be a real one, not just numbers that grab headlines.”

“Real fiscal stimulus”, “has to be a real one” – am now trying to understand Chetan Bhagat’s obsession with the word “real”! What does he mean by all these sentences? He couldn’t find time to give a single useful concrete suggestion on what a “real one” should look like? Does he want money into the pockets of the poor? Because that is being done already. Does he want loans to be given at low or no interests for small vendors to setup/revive business? Because that is being done already. You can read the article 100 times, but you will not get a clue on what the “real one” is!

So, what exactly does he want? He wants this – “The youth needs to shut that phone and rise.” Is your head spinning? It will spin further when you read the “real one” – “They need to keep asking questions — why isn’t there more growth?”

Chetan Bhagat tells us that the youth doesn’t care and are stuck doing silly things on their phone and for our economy to rise, the youth have to focus on their dreams and make money and shut down their phone! After reading the article, I am bamboozled as to who he is criticizing – the government of India or the youth of India?

No one is saying that a -23% drastic fall is something to ignore. But one needs to be really myopic not to see the acknowledgement of the problem all around – by the youth and by the government. Follow the right people to know the real demands of the various industries that are still suffering and how the package can be enhanced. Read the right publications to understand the nature of demands being made and how they are being fulfilled. And then perhaps you will see how your article falls short of logic and reason.

Chetan Bhagat may deride the belief of Hindus in his article (yep, he managed to write about Hindus, youth, economy and phones in the same article!), but you aren’t seeing straight if you cannot see the plain simple fact that Corona virus is not the act of this government and a tough decision had to be taken to arrest the spread of a dangerous virus, at the cost of temporary hit to the economy.

I have one final observation. If the youth shut their phones down, many youths associated with the phones industry will lose their jobs. Does Chetan Bhagat want to revive economy by losing jobs? Dear Chetan Bhagat, if you find this logic laughable, then that’s exactly how I found your article to be!

Image Credits: The Times of India