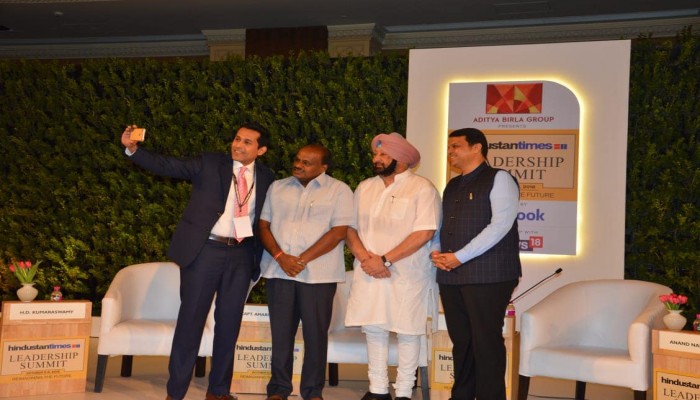 About three week ago, Hindustan Times conducted their annual Leadership Summit. This easy interview of Rahul Gandhi hogged all the limelight. However, just a couple of days back, thanks to YouTube’s recommendation, I viewed this awesome session with the Chief Ministers of three states – Punjab, Maharashtra and Karnataka. The session was very enlightening, and I would like to share with you some of the very salient points shared especially by the Punjab Chief Minister, Captain Amarinder Singh.

The anchor’s first question to this esteemed panel (starting with Capt. Amarinder Singh) is – “Is it easy working with the center?”. Pat comes the reply from Captain Amarinder Singh – “I have no problems. I am getting full co-operation”.  The shocked anchor continues to prod – “But there are issues”. Captain Amarinder Singh responds saying, “Well, which state doesn’t have issues.” He then goes on to cite financial issues that will arise after 2022 because of GST and how because of a Supreme Court ruling, the states have lost the power to appoint a DGP of their choice. Infact, he had to clarify that the DGP problem is because of the SC ruling and not because of the central government.

Later, during the interaction, Devendra Fadnavis had also endorsed Captain’s view that the states must have the power to choose their own DGP. This is a very good point that both the Chief Ministers (belonging to different parties) have bought out. However, since this is not a news worthy debate, we will never hear about a solution for this problem!

A question from the audience to Capt. Amarinder Singh was regarding the crop burning by the farmers of Punjab. Captain’s answer in its entirety is a treat to listen to. He explains how nearly 10 lakh of the 17 lakh farmers have less than 5 acres of land holdings, and how they cannot be asked to do a 3rd operation in one season (because each operation costs 2000 rupees). Capt. Amarinder Singh has asked the PM to give an additional 100 rupees per quintal so that the farmers can use that money to dig up, and not burn. The Prime Minister had sanctioned this amount, but for a different purpose – and that is to buy machines that dig better and therefore help enable one of the solution for this problem. I am fascinated by the kind of conversations that would have happened between the CM and PM on this topic – the nitty gritty of the policy to solve a long pending problem. However, our media can never be bothered to headline such important decisions and discussions! It is a real pity that these policy interventions by various government are never highlighted.

Since GST on petroleum is the flavor of the month, the eminent panel was asked this question. Capt. Amarinder Singh was very straight forward in saying that putting fuel under GST will further burden states because a very important source of revenue for the state is gone. H.D.Kumaraswamy agreed with him. So, a Congress Chief Minister and a Congress ally have both publicly disagreed with the continuous rant of Congress President Rahul Gandhi. Yet, the English media didn’t find this tidbit newsworthy. By the way, even Devendra Fadnavis has partially agreed that source of revenue for states will be dried up, but with appropriate safeguards, it can be bought under GST.

While watching this interview, I was reminded of this interview of Kerala Chief Minister, Pinarayi Vijayan. Despite all that clamor of social media during the Kerala floods, he has publicly said “it shows how supportive the Centre has been towards Kerala”. In this session, H.D.Kumaraswamy had also claimed that he had no problems working with the center. I had mentioned earlier too that co-operative federalism is one of the biggest achievements of the Modi government. Equal credit must also go the Chief Ministers of states ruled by the opposition parties, who have acknowledged this relationship. Perennial rabble rousers like Arvind Kejriwal and Chandrababu Naidu can be ignored. Infact, for the first 4 years in this term, CBN was gung ho about the center too.

This session in the leadership summit must rank as one of the best sessions ever. Three Chief Ministers belonging to three different political dispensations discussed state specific issues on a wide range of topics and giving credit where it is due, is a rarity in today’s noisy newsroom. This session should have made headlines and should have been the talking point across newsrooms. Instead, what we got was, yet another hyped up interview which Rahul Gandhi himself found so easy!