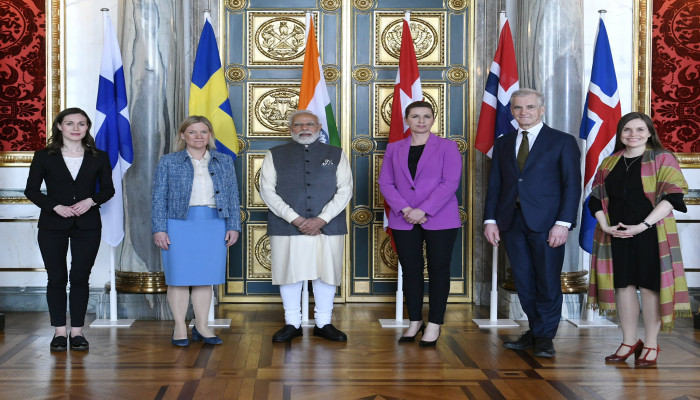 Contrary to the public perception of the Ukraine crisis driving wedge between India and Europe, India’s stance brought them together. Instead of adopting “one size fits all”, India is now gradually carving an agenda for different geographies in the Europe- Baltics, Balkans, British Isles, Caucasus, Alpine countries, Nordic Countries, diversifying its engagement with regional stake holders. India unveiled its first major outreach with the Nordic countries- Denmark, Iceland, Norway, Sweden and Finland in 2018. The first Indo-Nordic Summit held in Sweden gave a major fillip to India’s steadfast engagement with Nordics.

The second leg of Modi’s Europe bilateral visit to Denmark also included a significant engagement with Nordic leaders under the auspices of the 2nd Indo-Nordic Summit. Other than India, the US is the only country with which Nordics have summit level meetings. Though India had established diplomatic ties with the Nordics after independence, relations were marred by misunderstandings. For long India eschewed robust diplomatic ties with Nordics hailed for their exemplar sustainable development and innovative technologies.

Purulia arms dropping case in 1995 and subsequent refusal of Denmark government to extradite Kim Davy has implacably dented the bilateral ties which remained frozen till 2010. Ties revived after Denmark revoked the decision. By scripting a Strategic Green Partnership during Denmark Prime Minister Matte Fredriksen’s visit to India in October 2021, countries laid foundation for an enduring partnership.

In a rare display of bonhomie, Prime Minister Fredriksen not only received PM Modi at the airport but took him on a private tour of Marienborg, her residence. After holding bilateral talks, both leaders attended a forum of India-Denmark Business leaders. PM Modi invited Danish companies to take advantage of India’s enormous opportunities in areas like green technologies, cold chains, waste to wealth, shipping and ports1.

Shoring up outreach with Nordic countries, PM Modi and the leaders of the Nordic countries kicked off the 2nd Indo-Nordic Summit at Copenhagen. Rated as the best societies in terms of freedom of speech, religion, press, gender quality and human development index (HDI), Nordics by far have excelled in renewable energy generation, developing environment friendly technologies and are regarded as shining examples of post modernization.

India and Nordics have huge complementarities and share common features like democracy, equal opportunities for all people, adherence to rules-based international order and are open market economies. The individual economies of these countries are much smaller, together they account for a combined GDP of $1.6 trillion and the bilateral trade with India in goods and services accounts for $13 billion. India stands to gain from collaborating with Nordics who are leaders in global innovation and climate technology and seek to explore these applications to her flagship programs like Make in India, Start Up India, Digital India, Skill India and Swacch Bharat Abhiyan.

Among the Nordic countries Sweden, Finland and Denmark are part of EU. Iceland, Denmark, Norway are NATO members. In the aftermath of Ukraine crisis, Sweden and Finland are in talks to join NATO. Despite their western alignment, Nordics are known to be peace-mongers and have been on the forefront of facilitating peace processes.

Invariably, the summit started with a discussion on international peace and security, crisis in Ukraine, multilateral cooperation and emphasised the need for immediate reforms in UNSC and WTO. Firmly supporting the rules-based order, countries recognised the need for multilateral cooperation for building open, inclusive and accountable societies. Nordics have supported India’s permanent membership to UNSC. Iceland was one the first Nordic countries to support India’s candidature for a permanent seat in UNSC.

Climate agenda has been another focus area of discussion. Leaders contemplated on collaboration in environment sustainability including clean water, clean air and circular economy to maintain and support biodiversity, water and wild life, which is the basis for food security, human health and prosperity.

Emphasising the importance of green technologies, at the 2019 UN Climate Action Summit, India and Sweden launched an initiative- the Leadership Group for Industry Transition (LeadIT) which is supported by World Economic Forum (WEF). It aims to brings together countries and companies that are committed to achieve the Paris Agreement goals. Towards an effective climate action, India and Nordics agreed to support LeadIT for a green transition.

Nordics are important stakeholders of the Artic region and members of the Arctic Council. India secured observer status at the council in 2013. Since the inauguration of first station Himadri at Svalbard, Norway in 2008, India has sent 13 expeditions and runs 23 active projects in the region. Global warming led to the meltdown of the ice caps in the Arctic which has opened up new vistas for oil exploration, tourism and scientific research. Arctic is now making significant impact on the geopolitics as well. India is not new to the region. UK signed the Svalbard agreement in 1920. By virtue of being ruled by the UK, British India has been signatory of the agreement.

Reviving its Arctic strategy, India unveiled a new draft of its Arctic policy in January 2021. Giving a fresh impetus to its aspirations, India is now exploring opportunities for increased cooperation with Nordics in the Arctic on polar research, climate and environmental issues.

Post Nordic summit, Modi held in-person meetings with leaders of Nordic countries. Nurturing the relations with Finland, Modi having held virtual summit with his Finnish counterpart Sanna Marin in March 2021 reviewed implementation of the outcomes of the summit. Sustainability, digitalisation and cooperation in science and technology have been important pillars of Indo-Finnish partnership. Finnish products are in high demand in India. Over 100 Finnish companies operate in India. Modi invited Finnish companies to partner with Indian counterparts in telecom infrastructure and digital transformation5.

For decades, despite the complementarities, varied perception of values and virtues and the symptomatic pontification of human rights and categorisation of India’s democracy as chaotic has contributed to the disconnect between India and the Nordics. But PM Modi rebooted relations by recalibrating the strategic calculus through prioritised high-level Indian presidential visits to the region. Eventually these visits reciprocated by the Nordic counterparts infused a fresh momentum in the bilateral ties. Charting actionable blue prints and frameworks, India steadily crystallised partnerships.

Though Nordics enjoy an exceptionally ascendant trade trajectory with China, Beijing’s predatory chafes have dissuaded these countries from collective engagement. In comparison to the Dragon, India’s trade with Nordics is miniscule. India’s commitment to democratic principles, pluralism, diversity, tolerance and accommodation has ostensibly brought these two Sides together. Further India’s law-abiding demeanour in maritime delimitation with Bangladesh, has earned plaudits from the Nordics seeding the inauguration of first edition of India-Nordic summit.

India’s resilience, people-centric governance milieu, climate action agenda, renewed push for green energy and its relentless pursuit for sustainable development and higher growth embracing advanced technologies had found congruence with the Nordics. Ahead of western peers in harnessing innovative technologies, placed at higher tier of development, India’s pitch for climate adaptation and diversified mix of energies offers numerous opportunities for the Nordics for investment and collaboration. Projected to become third largest economy by 2030, Nordics are gravitating towards India.

Trouncing the historical trepidations, misunderstandings that encumbered India’s Nordic outreach, Modi has laid a firm foundation for a holistic partnership. The 2nd India-Nordic summit has admirably nurtured this blossoming partnership.