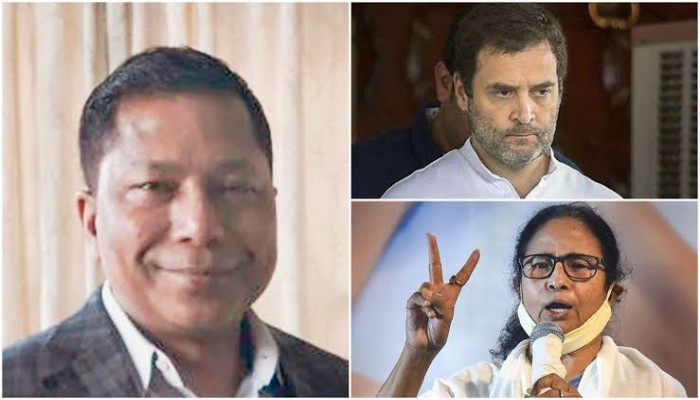 In a major blow to Congress Party in Meghalaya, 12 of the 17 party MLAs joined the Trinamool Congress (TMC) on Wednesday. The 12 MLAs also include former Meghalaya CM Dr Mukul Sangma. Sangma, the Leader of the Opposition in the Assembly, was reportedly unhappy with the Congress's top leadership.

Following this move, TMC is now the principal opposition party in Meghalaya. The Congress, which so far had 17 MLAs, is now reduced to only five.

Reacting to this move, Dr M Chuba Au, BJP in-charge of Meghalaya said, “Congress is a party with no leaders. Naturally, it is like a rudderless ship and therefore, its party leaders want to go somewhere where they can get some sort of security. Cannot really blame the MLAs for jumping ship to another party," as quoted by CNN-News18.

In 2012, the Meghalaya Pradesh Trinamool Congress was formally launched with an intention to contest 35 of the state's 60 seats.

Earlier on Wednesday evening, Mamata Banerjee met Prime Minister Narendra Modi in the national capital and urged the latter to withdraw the decision to extend the territorial jurisdiction of the Border Security Force (BSF) in Bengal.

She also invited the Prime Minister to inaugurate the Bengal Global Business Summit scheduled in April next year.

The Ministry of Home Affairs (MHA) recently extended the jurisdiction of BSF up to 50 km inside the international borders in West Bengal, Punjab and Assam. The West Bengal Assembly had on November 16 passed a resolution against the Centre's decision, becoming the second state after Punjab to oppose the move in the state legislature.

"I have told the Prime Minister that there is no need to increase the territorial jurisdiction of BSF, because it will come in direct conflict with the law and order of the state. Recently, the BSF killed three people and there are several cases when the BSF troopers opened fire on the villagers. I have told the Prime Minister that if they (BSF) need any help, we are ready to provide it, but the Centre must withdraw the extension of the territorial area of BSF," Banerjee told the media after the meeting.