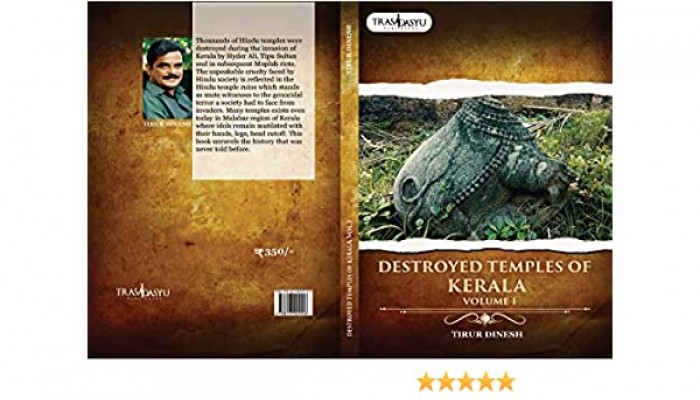 Iconoclasm in Kerala too

In 1990, the late Sita Ram Goel, historian-publisher from Delhi, in his book Hindu Temples, What Happened to Them, compiled a list of some 1862 temple sites where the temple had been destroyed by Islamic iconoclasm, often to be replaced with a mosque. Those are 1862 falsifiable claims, as a scientific hypothesis requires, and none of them has been refuted in the intervening 30 years.

The list was by no means exhaustive. Likewise, historian Meenakshi Jain's 2019 book Flight of Deities, listing murtis being spirited away by worshippers in the nick of time to protect them from approaching armies of iconoclasts, is very far from complete. Books as hefty as hers on India as a whole wait to be written on each of India's provinces. Now, a start has been made listing and discussing demolished temples in Kerala.

In Goel's list, Kerala was really underserved, with only a mosque in Kollam and a Palghat fort of Tipu Sultan mentioned in which temple materials were used. (Hindu Temples vol.1, p.133). Kerala was not the hotbed on Hindu-Muslim conflict, rather well-off compared to North India, that bore the brunt of the repeated waves of Muslim conquests and iconoclasm. The periods of temple destruction there are mainly the occupation by Hyder Ali and his son Tipu Sultan (late 18th century) and the Moplah Rebellion (1921).

Now, the 157-page book Destroyed Temples of Kerala, vol.1 (so, more volumes are coming), by Tirur Dinesh, speaks of "thousands" of "destroyed Hindu temples" (back cover) in the far southwestern part of India alone. He zooms in on one case each in 25 chapters, where a "case" or "incident" of iconoclasm usually means more than one temple, or a major temple with a number of dependent smaller temples. (Even in Richard Eaton's list of "80" cases of iconoclasm, nowadays cited for authority by the secularists as "the number of destroyed temples", the ca. 1000 temples destroyed in Varanasi by the Ghurid army count as a single "case".) Nor does a single demolished temple mean that it was demolished only once.

Thus, "Chokkoor Sreerama Kshethra was demolished during the time of Tipu's invasion and again during the Moplah riots (...).Tipu's army entered through the Thamarassery mountain pass, killed as many Hindus as they could, terming them as Kafirs, destroyed the temples all the way and spared only those Hindus who were willing to accept Islam. They demolished nearby temples like Kulikkapra Siva Temple, Kuzhikalaattu Siva Temple, Pongattur Subrahmanya Temple near to Manipuram, etc., and reached Chokkoor Srirama Temple." (p.59-60) The several demolitions of all these temples altogether form one case, here one chapter.

Dinesh has personally visited all the sites and provides original photographs. Every site has a different story, which he relates in detail, often after painstaking original research. The mythical origin of the temple is also exploredUnlike Goel's bald enumeration followed only by the general ideological context, this list provides ample local context.

In some cases, the temple demolition does not date back to historical episodes like the Moplah Rebellion, but took place within living memory, with eye-witnesses still around to be interviewed. The Iringavoor Siva Temple was the victim of a bomb attack on 31 July 1985. The perpetrators were local Muslims descended from Hindus forcibly converted by Tipu Sultan. The Islamic ideology that motivates iconoclasm, that motivated Hyder and Tipu and the Moplahs to it, is still alive and unchanged. But the good part of this story is that this temple is presently being revived. (p.43)

Where the demolished temples were not replaced with mosques, which are immunized and perpetuated by the Places of Worship Act 1991, the ruins often become the germ of a new temple. Thus, the Malaparambu Maattummal Narasimhamoorthy Temple had already gone through convoluted proceedings (including the return to Hinduism of some Muslims and the menacing resentment of the local Muslims for that) to set up a trust, revive the temple and renovate it, when “in 2005 the temple was released to the trust. Following this they started the renovation process and found the Narasimha’s idol as 6 piece. The fund to build [the Sanctum] Sanctorum was raised from the native Hindus.” (p.110)

Other devotees are now preparing for a revival of the Paruthikkottamanna Mahadeva Temple, after excavating it from the forest that had covered it over in the past two centuries in 2013: “The believers hope that they will overcome hurdles, and well-wishers will financially back them up for the renovation.” (p.138) In some cases, the author himself partakes in these revival efforts. At any rate, this way he manages to end sordid stories of temple destruction on a constructive note.

Why did these things happen, and sometimes not happen? To start with the former: Islam teaches and commands iconoclasm, with Mohammed himself having set the example, most emblematically with the destruction of the 360 idols in the Kaaba. That was the general rule to which Hyder, Tipu and the Moplah Khilafatists adhered.

But the latter case, non-iconoclasm, has its part of the truth as well. There is a secularist argument that Tipu Sultan actually patronized Hindu temples. The argument suffers from the usual secularist flaw of wilfully confusing an exception with the rule, but yes, next to numerous temple destructions, there are a few such cases. The reason was that "Tipu blindly believed in astrology. Astrologers attributed the continuous defeats met by Tipu to the demolition of temples and suggested the renovation of temples as the only remedial measure. His donations to the temples were a result of this advice." (p.8)

So, the cases where he patronized idol temples do not prove that next to a fanatical iconoclastic Islam there is also a pluralistic Islam (even wrongly extolled as “the real Islam”), as secularists would like you to believe. They only prove that next to Islam, Tipu also held another belief, viz. in astrology. When his belief in astrology, rendered acute by setbacks on the battlefield, did not intervene and Islam had free reign, he was an unmitigated fanatic eager to convert Hindus forcibly and destroy their temples. His letters down to the inscription on his sword testify to this Islamic zeal. As do the mute witnesses: the ruins of Hindu temples and the mosques he built with their debris.

A few times the wording in this book is not precise enough, either because the author is a bit careless in doing justice to the evidence available, or because the evidence is still really deficient. Thus, the Chamravattom Kannanoor Pisharath temple "was last demolished at the time of the Moplah riots" (p.39), factual enough, but many temples were demolished several times in India's long history. So earlier, it was "believed to be destroyed at the time of Tipu's invasion" (p.38, emphasis added). In a scholarly book of facts, the word "belief" detracts from the power of persuasion; it should be avoided. To be sure, it may reflect a real state of affairs, where a scenario is probable but not altogether certain, there really exist several more options between totally yes and totally no. Still, in the present war with the anti-Hindu forces, anything less than full certainty, even including an honest admission of mere probability, will be exploited by your enemies.

And while we are formulating a bit of criticism, a trivial but non-negligeable point is the language of this book. Proofreading by a native speaker or at least someone fluent in English and in the standard transcription of both Sanskrit and Malayalam would not have been a luxury. For a temple mentioned above, we note the variant spellings Srirama and Sreerama, neither of them standard. The definite article "the", non-existent in the Indian (and the immense majority of the world's) languages, is one of the grammatical difficulties in English. In most Semitic, by extension Greek, Germanic and Celtic, and by further extension the Romance languages, it also exists but its use is more predictable; in English it is quite irregular and idiomatic. It makes little difference for a correct comprehension, but not mastering it just looks bad, e.g. here: "The most sacred place of South India, Brahma temple among these, was demolished by Mysore army" (i.e. by Hyder Ali; p.94). It shouldn't have been too much trouble to change this to "the Brahma temple" and "the Mysore army". For most readers, stunted language indicates stunted thinking, and thus detracts from the author's credibility.

The list of what was actually done to the Hindus is getting longer, and more volumes inventorizing this chapter of Indian history are sure to follow. Every part of India could produce such a volume. We must be grateful to Tirur Dinesh for breaking the ice in localizing and deepening the line of research pioneered by SR Goel.