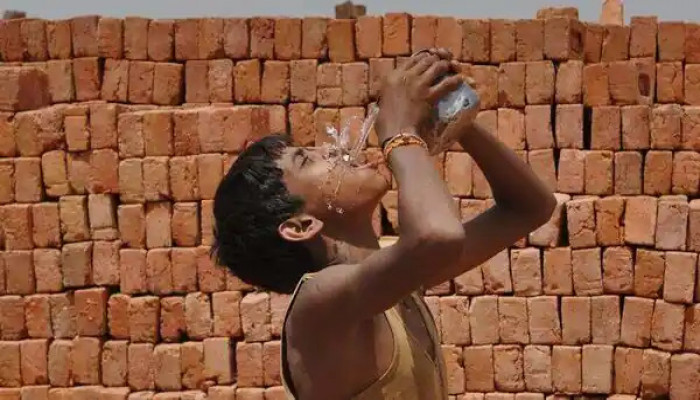 Severe heat waves, responsible for thousands of deaths across India over the last few decades, are increasing with alarming frequency and soon the country could become one of the first places in the world to experience heat waves that break the human survivability limit, according to a new report.

The Human Survivability Limit refers to the rule of thumb that states humans can survive three minutes without air, three days without water, and three weeks without food, but there are always extraordinary cases—some have gone up to nine days without water.

"In April 2022, India was plunged into the grip of a punishing early spring heat wave that brought the country to a standstill, with temperatures in the capital, New Delhi, topping 46 degrees Celsius (114 degrees Fahrenheit). The month of March, which witnessed extraordinary spikes in temperatures, was the hottest ever recorded", it said.

The report will be released during the two-day "India Climate and Development Partners' Meet" being organised by World Bank in partnership with the Kerala government here.

The World Bank report warned that rising heat across India can jeopardize economic productivity. "Up to 75% of India's workforce, or 380 million people, depend on heat-exposed labor, at times working in potentially life-threatening temperatures. ...By 2030, India may account for 34 million of the projected 80 million global job losses from heat stress associated productivity decline", the report said.

Analysis by global management consulting firm, McKinsey & Company shows that lost labour from rising heat and humidity could put up to 4.5% of India's GDP –approximately $150-250 billion – at risk by the end of this decade.

India's long-term food security and public health security will depend on a reliable cold chain network. Transporting food and pharmaceutical goods across India requires a system of cold-chain refrigeration that works every step of the way.

"A single temperature lapse in the journey can break the cold chain, spoiling fresh produce and weakening the potency of vaccines. With only 4 percent of fresh produce in India covered by cold chain facilities, annual estimated food losses total $13 billion", it said.

It also noted that the third largest producer of pharmaceuticals in the world, pre-Covid-19, India lost approximately 20% of temperature-sensitive medical products and 25% of vaccines due to broken cold chains, leading to losses of $313 million a year.

According to a similar study conducted by researchers at IIT Gandhinagar, the frequency of extreme weather events, such as floods and heatwaves, is expected to increase significantly in India as a result of climate change.

To estimate India's likelihood of consecutive extremes, such as summer heatwaves and excessive rainfall during the subsequent summer monsoon season across the same locations, the research team looked at the years 1951 to 2020.

"The G20 Climate Risk Atlas also warned in 2021 that heat waves across India were likely to last 25 times longer by 2036-65 if carbon emissions remain high, as in the IPCC's worst-case emission scenario," the report further read.

According to one study, if the global mean temperature increases by more than 1.5 degrees Celsius from the pre-industrial level, the proportion of the total population and urban area that will be exposed to successive extremes will rise rapidly.

According to the researchers, under the lowest emission scenario, the length of a heatwave will grow from an average of 3 days in the current climate (1981-2010) to 11 days by the end of the twenty-first century (2071-2100).

Under the scenario with the highest emissions, however, they predicted that the length of heat waves would increase to 33 days by the end of the century.