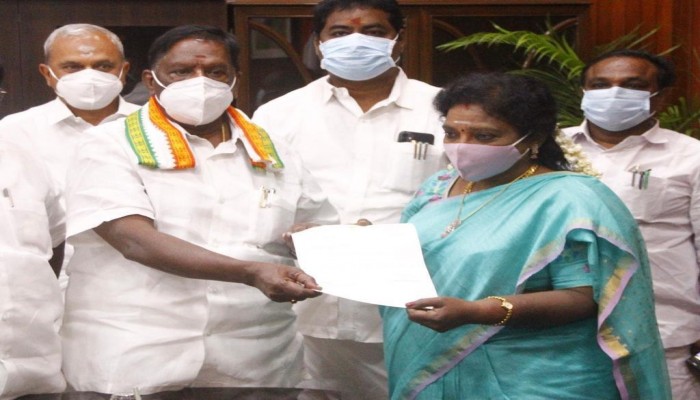 In a huge setback for the Congress party ahead of the polls in Puducherry, the V Narayanasamy government lost its majority in the Union Territory. After walking out of the Assembly, Narayanasamy tendered his resignation to Governor Tamilisai Soundararajan.

After a series of resignations, the Congress-DMK have 12 MLAs (including an Independent who is supporting the government) in the House whose effective strength is now 26, while the opposition alliance has 14 MLAs. With just three months left for Assembly polls, there are also reports of the Congress “holding talks” with some AIADMK MLAs to save the government.

The Bharatiya Janata Party (BJP), All India Anna Dravida Munnetra Kazhagam (AIADMK) and NR Congress had submitted a memorandum to the Lieutenant Governor on February 18, stating that the ruling minority government is in minority.

CM Narayanaswamy has claimed the Opposition has only 11 MLAs with the rest three being nominated MLAs who have no voting rights.

Following a demand from the Opposition led by All India NR Congress founder N Rangasamy, the floor test was ordered Thursday by Tamilisai Soundararajan, the Telangana Governor, immediately after she was handed additional charge of Puducherry. Soundararajan was sworn in after the former Lt. Governor Kiran Bedi was removed from the post.

Narayanasamy accused the opposition BJP and NR Congress of bringing down his government and also blamed former Lieutenant Governor Kiran Bedi of "colluding with the opposition". He resigned soon after delivering a speech in the assembly.

Yesterday, the ruling coalition lost two more MLAs; Congress's K Lakshminarayanan and its partner DMK's K Venkatesan resigned. Four-time Congress MLA Lakshminarayanan said he was upset at not getting "recognition" in the party. He said he wasn't made a minister, Speaker or party chief and that the NR Congress and BJP had approached him.

The Congress collapse is seen to benefit the BJP ahead of elections due by May in Puducherry, along with Tamil Nadu and three more states.

The Congress has lost its only government in the south. If the NR Congress is invited to form government, the BJP is likely to be part of a ruling coalition and its three MLAs - all nominated members - could become ministers.

Power in Puducherry, the BJP assesses, would add to its tally of southern governments after Karnataka. In the 2019 Lok Sabha polls, the BJP couldn't win even a single seat in Tamil Nadu.